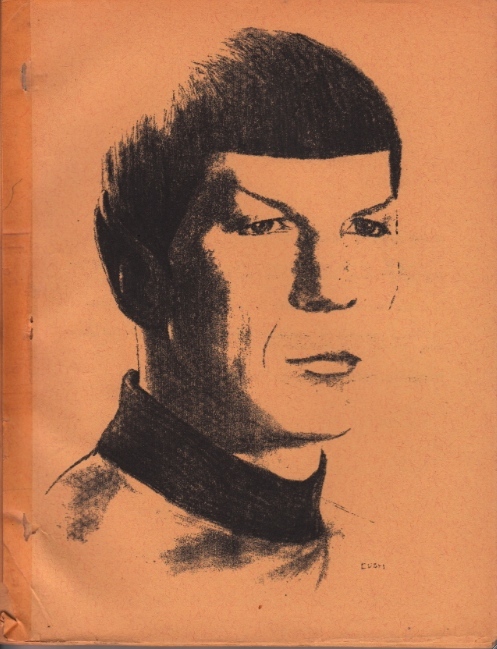 During the interval since the previous issue, the editors engaged in correspondence with several figures in the Trek world, and excerpts from their letters are reprinted. Featured are Gene Roddenberry, Dorothy Fontana, James Doohan, Walter Koenig, DeForest Kelley, and Leonard Nimoy.

Sherna Comerford writes "A Revisit", which updates articles from the first issue in light of information from the newer episodes and communications.

"The Man in the Hero Suit" by E. A. Oddstad is a very interesting essay on Kirk's character. An excerpt from the end:

"The Dour Scots Engineer" by Ruth Berman examines the character of Scotty as an example of the archetype named in the title.

Poul Anderson contributes a poem in Kirk's voice, "Star Date:6721; Condition:Confused", a parody of "Trees" by Joyce Kilmer: "I think that I shall never grok / A man as logical as Spock."

Leonard Nimoy would go on to play Sherlock Holmes in a short film in 1975 and on stage in 1976, and the Holmes connection would get a nod in Star Trek VI: The Undiscovered Country (written by Nicholas Meyer, author of The Seven-Per-Cent Solution), when Spock says, "An ancestor of mine maintained that if you eliminate the impossible, whatever remains, however improbable, must be the truth."

"The Allure of Uhura" by robert toomey is a somewhat aimless essay in praise of Uhura--especially of her beauty. She is competent, too, toomey allows, which she manages "without ever once losing any of her feminine appeal." It's a curious thing to see.

In "Communication from Star Fleet Intelligence", John Mansfield offers up "the Klingon view of Vulcans, and of Vulcan-Terran relations, which is quite faulty." The Klingon opinion is that Vulcans are deceitful and that Earth is "waiting for the day when it will be liberated from the Vulcan yoke" by the Klingons, whose job it is "to spread enlightenment throughout the stars." A unique view of Klingons!

In "God and the Vulcan Mind", Joyce Yasner author argues that Vulcans could be religious, for they "as a people of science and logic, could find a scientific explanation of God which says that He is energy" and that "Vulcans can also believe in reincarnation and immortality." This issue would eventually be addressed by Star Trek: Enterprise, many years later.

In "A Speculation on Spock's Family", Sandra Miesel argues that Sarek might have been wed to a Vulcan woman before Amanda, and thus produced offspring other than Spock, though "leading Vulcan xenologist Dorothy Fontana" maintains otherwise. Star Trek V: The Final Frontier agreed with Miesel on this one.

"Personal Diary Entries" by Deborah Langsam descibes how Ensign Michaelson, a medical trainee who has been placed under Chekov's command in order to get some interdepartmental experience, gets back at him for sexually harassing her and generally being a jerk.

"To Christine" by Lyn Veryzer is a poem warning Christine (Chapel, presumably) not to waste her time pursuing Spock, who cannot love her.

"On the Origin of Humanoid Life in Our Galaxy" by Jean Lorrah and Willard F. Hunt argues that the striking similarity of the species in the galaxy indicates that the galaxy must have been colonized, long ago, by some earlier humanoid species, which has been lost to memory. TNG's The Chase supports this theory.