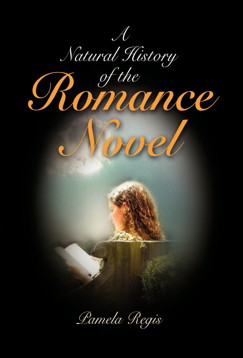 A Natural History of the Romance Novel

Regis states her basic complaint in the preface:

Part I: Critics and the Romance Novel

Regis summarizes negative critical reception of romance novels as stemming essentially from a complaint that the goal of marriage is damaging to women, erasing the individual value of the heroine and (perhaps) reinforcing the reader's own bondage in marriage.

Fine. If that were the only complaint critics would level against romance novels, then the criticism would be pretty weak, indeed, and Regis has a chance of answering it in this book. But I doubt that this really represents the breadth of critical response to the genre.

Regis asserts that the selection of books considered by critics is too small:

I am prepared to believe that the sampling of books really was too narrow, in any given individual case, but I am not prepared to accept that the only sufficient sample would be something more like "all published books." If there is indeed a genre, with its own conventions, then there must be some acceptable subset that exemplifies these conventions. That's what it means to be a part of a genre! And Regis, too, is prepared to give a single definition of romance novels; I presume she will defend why other critics' ideas are too broad or too narrow, but her generalization is in the Goldilocks zone.

Chapter 2: In Defense of the Romance Novel

Regis asserts that romance novels ending in marriage is not a bigger problem for the genre than Odysseus returning to Penelope is for the ancient Greek epic: stories must, eventually, end. A romance novel ending with marriage or betrothal does not erase what came before, does not 'extinguish' the heroine.

Agreed, provisionally. However, if the most popular form of literature invariably ends with marriage, then we are right to question why this is the generic convention, and what the effect might be. Regis addresses this problem by simply dismissing it. The marriage, she argues, is not the important thing in romance novels. It is not the ending but the process of getting there--overcoming obstacles--that is the point of the genre, and it is for this that readers are reading the books.

That's not a satisfactory response. Even if it's not the point, surely it is a point, and ignoring it won't make it go away.

Regis attempts to argue that the marriage isn't a kind of bondage, but a kind of freedom:

The heroine is free to follow the cultural norms. She is free to choose to marry the hero, and always does, because in a romance novel she has no other option. What an interesting kind of freedom this is.

Regis meanders for a while about what is a romance (Mallory wrote them!) and what is a novel (Austen wrote them!), which is pointless since we all already know that definitions can be a bit murky. Grape Nuts contains neither grapes nor nuts (discuss!).

Regis has her own definition of the romance novel (stated, but not discussed, in the previous chapter):

Regis discusses Frye's Anatomy of Criticism here, which I will need to consult.

Now Regis will expand and explain her definition, one part at a time. She describes how Pride and Prejudice includes these elements, as an example.

Following the definition, she analyzes Kathleen Gilles Seidel's 1994 novel Again to show that the same definition applies to modern works.

All romance novels will have all of these elements, although some of these elements might not be dramatized in the novel. It's enough for the element to be mentioned in passing by a minor character.

Any exercise in definition is likely to involve some arbitrary choices, but it's curious that Regis includes the Point of Ritual Death as an essential element of romance novels, when it feels like something that is merely formula--albeit popular one. It would be instructive to have, for each essential element, a list of novels that lack only that element to be romances.

The society which is to be changed in the novel, which oppresses the heroine at the beginning.

In P&P, this is both the historical setting in general, and the Bennets and other characters involved in particular.

The heroine and hero meet.

At the Meryton ball, Elizabeth and Darcy first meet.

The impediments to the joining of the hero and heroine.

What else but Darcy's Pride and Elizabeth's Prejudice could be the primary barriers here? There are other barriers as well, of course.

This is, of course, true, insofar as the novel is working toward that sort of conclusion, but it speaks to the constricting nature of the romance novel that the heroine's beliefs and desires are merely obstacles to her getting together with the hero. In essence, according to Regis's definition, if the heroine doesn't want to be with the hero, then she is wrong.

A scene or series of scenes scattered throughout the novel establishes for the reader the reason that this couple must marry.

The hero and heroine declare themselves for one another, perhaps in separate scenes, and perhaps more than once in the novel.

This overwrought expression is from Frye, apparently.

The point in the narrative when resolution seems impossible, the barriers most difficult to overcome.

In P&P, this would be when Lydia runs off with Wickham.

This recognition is whatever overcomes the barriers. Facts come to light, the heroine "understand[s] her own psyche better", whatever.

What it says on the tin. "In romance novels from the last quarter of the twentieth century marriage is not necessary as long as it is clear that the heroine and hero will end up together."

These are common, but not required.

An actual dramatization of the wedding, etc., is not a part of every romance novel, though it is implied to happen.

This event represents the construction of the new society around the couple.

A person who was a barrier to the heroine and hero marrying is ejected from the new society.

Alternatively, the person who was a barrier can have a change of heart.

Although, Regis was willing to say, before, that the elements of a novel could occur offstage, here she says that "as long as the focus stays on the core, essential elements, the work is a romance novel." It seems like she has said that these elements really aren't essential, if they don't actually require any focus. What gives?

Although works in other genres can be read (or misread) as romances, since many works contain romantic elements, those works that do not focus on the essential elements of a romance novel are not part of that genre. In particular, Regis excludes Rebecca (a gothic which "contains fragments of a romance novel") and Gone with the Wind.

Regis complains about critics not considering the history of romance novels when they discuss the genre, but then comes out with this.

It's not entirely fair to judge past works in light of more recent ones, sure, but isn't considering the whole of the genre, from beginning to end, exactly what Regis claims should be done? Yet she wants to dismiss merely popular modern exemplars, so that we can pay attention to older, more accomplished works.

Regis complains that Toni O'Shaughnessy Bowers unfairly and incorrectly claims that romance novels tend to have passive women, but when making her own limited selection of romance novels to analyze, she picks five novels from a 170-year span (remember that before she complained that nine or twenty novels chosen from a much more limited time span was too small to be representative) that specifically have assertive heroines:

Choosing one novel for every thirty-five years, you could prove anything you want!

Chapter 8: The Best Romance Novel Ever Written: Pride and Prejudice, 1813

Chapter 12: The Popular Romance Novel in the Twentieth Century

Chapter 15: Harlequin, Silhouette, and the Americanization of the Popular Romance Novel: Janet Dailey