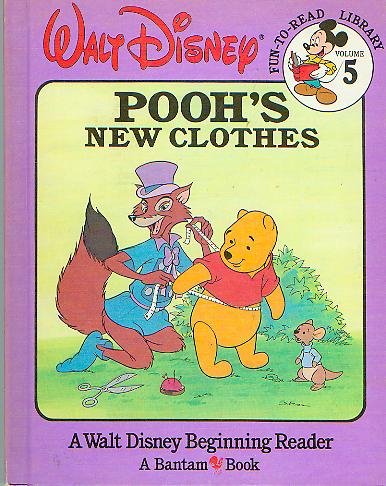 In this story, Sly Fox has come to the Hundred Acre Wood, and is showing off clothes. He offers to make Winnie-the-Pooh a suit of clothes, in exchange for all of his honey. The clothes, he says, will be made of a wonderful, magical cloth, which only wise people can see. All the residents of the hundred acre wood come to see the clothes as they are being made, and pretend to be able to see them (except for Roo, who insists there are no clothes). At last, the clothes are done, and Pooh asks everyone how he looks. They compliment his new clothes, and so Winnie-the-Pooh believes that although he is not wise enough to see them, at least his friends are. But the trick is revealed when Pooh asks Christopher Robin how he looks, and is told he's only wearing the same clothes as always--for no one is wiser than Christopher Robin.

The story is, of course, just the same as The Emperor's New Clothes, down to a child (Roo) being the only one to admit he can't see the clothes. It's a little spoilt by the truth being revealed by Christopher Robin, rather than Roo being believed, but this is a story about Winnie-the-Pooh, after all. It's a fun little story. And Pooh is wiser than he believes--when the trick is revealed, Pooh wishes he'd kept a little honey, for "it helps to have honey at a time like this," which is quite right.

The illustrations are again nice in this volume. It's especially fun to see Sly Fox showing the empty clothes hanger to everyone, and to see Pooh staring at it appraisingly, as though he'd be able to see the clothes if only he looked hard enough.