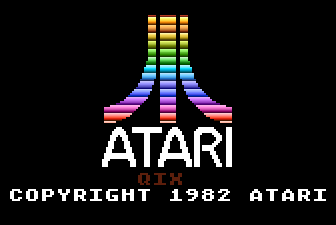 Qix for the Atari 5200 is a straightforward port of the arcade game, developed by Taito America Corporation and published in 1982 by Atari.

There have been ports of Qix for most systems, and other games, such as [JezzBall], have been inspired by it. The premise is simple: you must draw lines across the playing field in order to fill in areas. After a certain percentage has been filled in (in this version, 65%), the level is complete, and bonus points are awarded for any additional area filled in beyond the required percentage.

It’s not as simple as it may seem, however. You begin with a totally empty playing field–-empty, that is, except for you, the Qix, and the Sparx. The Qix moves about in the unfilled area, and if it touches you or a line that you are drawing, you lose a life, and the line you were drawing disappears. The Sparx travel around the edge of the filled area, like you do, and touching them similarly ends your life.

It is possible to take the screen slowly, by drawing small boxes around the edges, thus avoiding leaving long lines exposed to the Qix, but this carries its own danger: a timer at the top of the screen is constantly counting down, and each time it runs down two new Sparx are created. Too, on higher levels, the Sparx will chase you up the lines you are drawing once the timer runs out.

By cleverly creating lines, it is possible to trap the Qix in a very small area, and fill a large percentage of the screen. This can be quite valuable, since each extra percent filled is worth 1000 points. Too, trapping two Qix in separate areas multiplies your points on following levels.

Gameplay: 9/10
I found the controls a little difficult to use accurately, but it may have been my joystick rather than the game. Of course, the 5200 had a notoriously bad controller as well, so perhaps I should consider it to be a part of the ambiance. Control issues aside, the gameplay is essentially perfect. It is simple, easy to understand, and challenging as you progress. It’s not without good reason that this game has been ported so often.
Graphics: 8/10
The graphics look as good as can be expected for a 5200 game. The movement of the Qix is a nice effect, and a mostly-filled screen actually looks sort of nice, with the orange and blue areas separated by the white lines you drew. Qix loses a couple of points, though, since I found the text somewhat hard to read (which I suspect could have been improved), and I don’t quite like the orange color for the slow fills.
Sound: 6/10
There’s no music, although that’s not uncommon for contemporary games, and the sound effects are acceptable. I think this could have been improved somewhat–-[Pitfall], released the same year, or especially [Pitfall II], released two years later, had rather nice music, and it would have been nice to have something in the background to listen to.
Personal Slant: 8/10
I enjoyed playing this quite a bit. There are certainly better versions available–I prefer the arcade original, in fact–but this is still fun.
Total: 7.75/10
Qix is a well-done port of a good game, which has endured throughout the years and inspired other interesting games. It looks a little primitive now, but the gameplay is still solid. I might choose a different port to play, but if I had to pick my top four or five Atari 5200 games, this would surely be in the list.