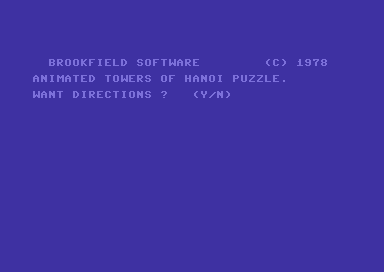 In 1980, according to GB64, Brookfield Software released an updated version of Glen Fisher's Hanoi, including limited color.

This newer version is substantially similar to the first release, including the same animation and interface, and very limited color.

As before, there's nothing in particular to recommend this version, so let this brief review stand as testament to the insignificant nature of the differences between the 1978 and 1980 versions of the game.