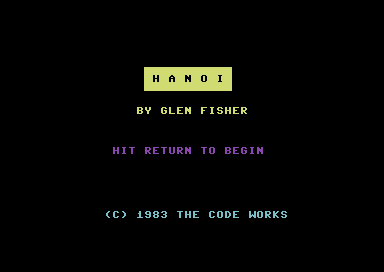 In 1984, a final (to my knowledge) update to Glen Fisher's Hanoi was released, also called Hanoi.

The gameplay is identical to its predecessors from 1978 and 1980. The only difference is that this 1984 version includes color--quite a bit more than the 1980 version, and in contrast to the monochromatic 1978 version.

I suppose that this version is the best of this lineage, which isn't really saying much. Of course, for a Tower of Hanoi game, there isn't much to say.

This version was released as a type-in game in Commodore 64 Fun and Games by Jeffries, Fisher, and Sawyer.