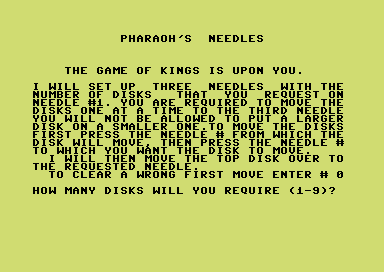 Pharaoh's Needles is a 1982 Tower of Hanoi game for the Commodore 64 by Ron Wagner & Wim (thanks to GB64 for this information).

Well, this incarnation of the Tower of Hanoi puzzle is a bit more appealing than Glen Fisher's versions. Rather than just moving discs around, we're going to engage in the Game of Kings! Very exciting. Of course, the rules are all the same, but you know, you've just got to give 'em the old razzle dazzle and what does it matter if your game's nothing new?

Pharaoh's Needles looks nice, and, like Hanoi, animates the moving of discs. Unlike, Hanoi, though, the animation in this game is quick. It's much nicer, especially if you have the misfortune of choosing to play with nine discs, as the game allows. 511 moves, even quick ones, would wear on my patience long before the game was over. Still, I can't fault the game for giving you the option.

This is the best Tower of Hanoi game, so far, and will hold that title for several years.