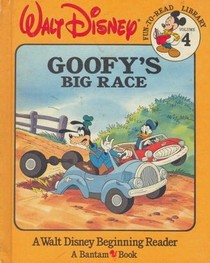 Donald and Goofy meet on the road one day. Donald is driving a fast, new car, while Goofy is driving an old, slow car (which he calls 'Bessie'). Donald challenges Goofy to a race to the ice cream shop. Donald, overconfident, makes many stops to wash his car, eat, play baseball, and even take a nap. Goofy, though, presses on, saying "slow and steady, steady and slow, that's the way to go." In the end, of course, Goofy beats Donald to the ice cream shop, much to Donald's surprise and dismay.

Again I say it: I'm a sucker for retellings of classic folk tales, and they don't get much more classic than The Tortoise and the Hare. The story in this one is fairly fun; not as good as Mickey Meets the Giant, but still nice.

As usual for books in Walt Disney's Fun-to-Read Library, the illustrations are great. It's fun to see Donald's misfortunes as he keeps taking breaks from the race, and in the illustration of Donald napping under a tree, there's even a rabbit napping there with him, in a nod to the original tale.

Goofy's Big Race is a good children's book, and is certainly one of the better books in Walt Disney's Fun-to-Read Library, living up to that series's name.