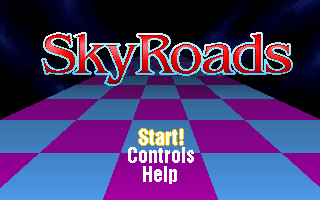 The object is to complete each road, passing through the pipe at the end. There are various obstacles along the way, including blocks or gaps that must be jumped over, pipes that must be entered or avoided, as well as the threat of running out of oxygen or fuel before the end of the road.

The early roads are quite easy, requiring little jumping. Each can be completed on the first play through with minimal difficulty.

As the game progresses, though, the roads become more difficult, some requiring multiple tries to complete. This could be a good or a bad thing, depending on your perspective. Sometimes, pipes hide walls or missing sections of floor, which will kill you, so you must remember to avoid those pipes the next time through. In my opinion, since the levels are so short (each requiring less than one minute), this required repetition does not detract from the gameplay.

SkyRoads has nice graphics, and very nice music as well, together with fun gameplay–the makings of a great game. It does fall short on replay value, though. While the roads are still nice after you’ve beaten them, there’s no real incentive to play them again–no way to try to beat your best times (which wouldn’t really matter, since most roads will be completed at maximum speed anyway), no secrets to be found, and only one way through the road, with minor variations. Despite this fault, though, SkyRoads is well worth playing, even if you might not play it much after you’ve completed it.

Below you’ll find a video of the first three roads, Red Heat, being completed:

SkyRoads can be downloaded for free from Bluemoon Interactive.