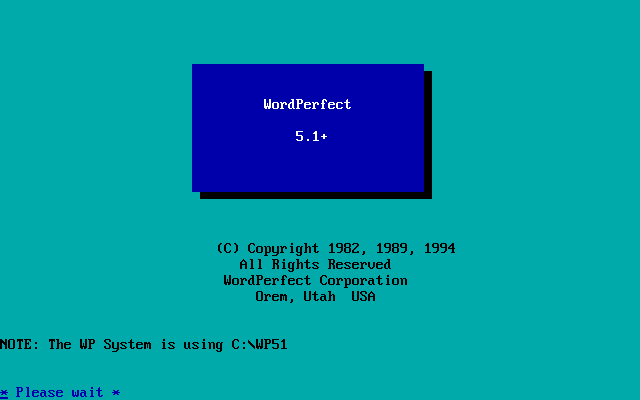 This one may be familiar to you. WordPerfect 5.1, released in 1989, was quite a popular word processor, and it persisted for many years. In fact, it seems that people still want to use it to this day. It was used in my keyboarding class, in high school, so this is a bit of nostalgia for me.

When you first open WordPerfect 5.1, you're greeted with a blank, blue screen, plus some details about the current position of the cursor. I'm fairly sure this violates a few interface design principles. On the other hand, considering that WordPerfect cost hundreds of dollars, perhaps they expected people to be willing to read the manual.

Once you know how to use it, WordPerfect 5.1 is a powerful word processor, capable of doing pretty much anything you'd like. More modern word processors may be prettier, but all of the basic functions were there. The image above is what WordPerfect calls draft mode--a semi-WYSIWYG display suitable for general use. You could also turn on 'reveal codes' mode, which displays markup in a manner reminiscent of HTML or BBCode:

A blank, blue screen is just so... [Italc On]inviting[Italc Off]... wouldn't you say?[HRt]

Naturally, when printed, the document would actually use italic or bold text, or whatever other formatting was selected. WordPerfect was intended, after all, for preparing documents for print, not for display on a computer screen. All of the various options could be accessed either though a menu (activated with Alt+=) or through some combination of modifier and function keys.

The Windows version of WordPerfect 5.1, released in 1991, defaults to a WYSIWYG view that should seem familiar modern computer users. It does still support draft mode and 'reveal codes' mode, for those who long for the (shall we say) simplicity of the DOS version.

I never used the Windows version of WordPerfect 5.1, back in the nineties. The word on the internet seems to be that it's very buggy, which is a shame, since it seems like a fairly usable word processor, otherwise.

Just for fun, I tried just double-clicking the document I saved in WP 5.1 for DOS, opening it in LibreOffice. As you can see, it opens and renders flawlessly, despite the programs being released 25 years apart--a true standard-bearer for backwards compatibility! It makes me wonder if the present incarnation of WordPerfect could do the same.

I could spend pages discussing all the features of WordPerfect 5.1, but I really just wanted a quick look at it, to allow for comparison, so this much will suffice. I'll write similar overviews of other contemporary word processors (Coming soon! Maybe.) and other applications, to show some of the variety in software on the market. There was a great deal of evolution in a fairly short time, so it should be interesting to see how they compare.