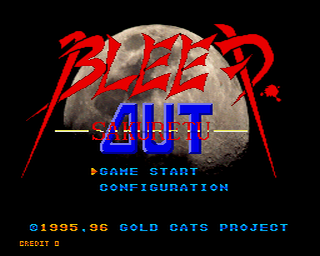 I don't believe I've written about any remotely popular games for at least two years... and I'm not about to change that. But I am writing about a good game, at least: Bleed Out Sakuretsu, a vertically scrolling shooter for the Sharp X68000, by Gold Cats Project.

First: yes, the title screen says 'sakuretu'. But the common romanization of this game's title seems to be 'sakuretsu', and as goes TOSEC, so goes my nation.

Bleed Out Sakuretsu has a powerup system reminiscent of Gradius. As you continue scoring points, you can purchase a shot upgrade, a barrier, or other, even more powerful powerups. The opposition is a variety of ships, small shots, and guided missiles.

The boss sprays out bullets danmaku-style, and periodically fires a pair of front-facing lasers. You've got to deal with this while avoiding guided missiles, and since you are destroyed in one shot (unless you buy a barrier), this, like the rest of the level, provides a good challenge.

Here, an unfortunate revelation: the boss is, as far as I can tell, invulnerable, because the available version of Bleed Out Sakuretsu is a trial edition, and I can find no evidence that any full version was ever created. I would love to hear otherwise, if anyone has better information on old doujin games than I do, because it's a very fun game.

It's hard to do a shooter justice with just words and screenshots. The video above shows (I believe) the entire game, which should give a much better picture of it.

If you like shooters, I'd say Bleed Out Sakuretsu is worth a try. It's only about two minutes long, but it's fun, and I believe there's a place for brief games, too.

The Touhou series looms largest on the doujin shooter landscape, of course, but there's a huge and fascinating variety of games (of all genres) stretching back decades, which I think could use some more attention from the English-speaking web. I'll probably be looking at a few more doujin games in coming weeks, so I'll try to shine a light on whichever titles catch my eye. Maybe there will be some hidden gems, or maybe just hidden failures. We'll see what comes.