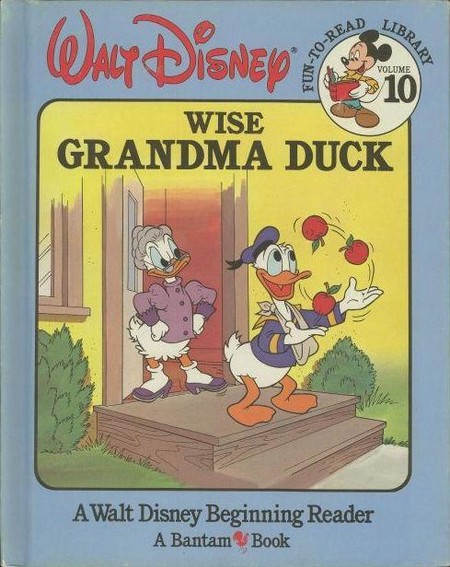 Donald Duck and his nephews, Huey, Dewey, and Louie are headed for Grandma's for vacation. When they arrive, she tells them that her farmhand has gone, and now she has no one to do the chores. The kids enthusiastically offer to help, but Donald is more reticent--farm work was not in his vacation plans! Donald suffers a series of mysterious injuries and ailments, which conveniently clear up just about the time the work is done. Will Donald get away with his laziness?

Wise Grandma Duck is the tenth book in the Disney Fun-to-Read Library, and the title pretty much gives away that Donald isn't going to be successful in his trickery. The fun of this book is in seeing the ways his subterfuge is revealed, and how he gets his comeuppance in the end. Like Mickey Meets the Giant, this is a story of the triumph of the clever. Also like Mickey Meets the Giant, this is one of the best books in the Disney Fun-to-Read Library.

Grandma Duck shows her cleverness in little ways throughout the story. When Donald is pretending to have a sore arm, she asks his nephews to throw him an apple. When he, unthinking, catches it with his 'sore' arm, she simply comments that she's glad his arm is better. She might have believed him the first time he claimed to be unable to work, but he didn't keep her in the dark for long.

In the end, Grandma Duck prepares a huge feast for everyone, giving each what he's worked for: corn on the cob for Louie, apple pie for Huey, and pumpkin pie for Dewey--and a tray of medicine for Donald!

Like the other books in this series, the artwork is high-quality and on-model. It's got a few illustrations that are fairly amusing, but there's nothing really outstanding.

Wise Grandma Duck may not be the best children's literature has to offer, but, as the series promises, it is fun to read.