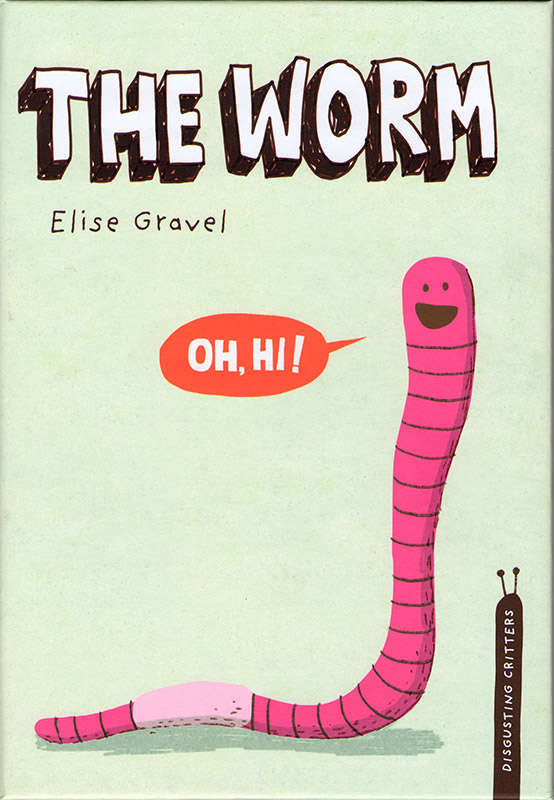 Slimy, pink, often seen with dirt or fishing hooks. What is it? The worm, of course! But how well do you really know them? Did you know that some worms can be as much as 115 feet long? Or that worms evolved with the dinosaurs? You'll learn that and more in Elise Gravel's book, The Worm.

Gravel's The Worm introduces children to the titular invertebrate with a series of interesting facts, accompanied by simple, charming artwork.

Each two-page spread presents a fact about worms, along with artwork demonstrating--or commenting on--the text. For example, the description of how a worm moves ("Earthworms move by squeezing their muscles, causing their bodies to contract and expand.") is accompanied by a helpful illustration; when the text is less kind to the worm ("An earthworm is basically a long digestive tract inside a muscle tube. It's that muscle tube that's slimy and disgusting."), the worm doesn't take it lying down, so to speak ("Hey! I am not disgusting!").

I enjoyed reading this book. The highlight is certainly the illustrations, but the book's educational content is interesting too, including some facts that even adults may not be familiar with ("many kinds of worms are hermaphrodites, which means they have both male and female reproductive organs").

The Worm, a translation from the French (original title: Le ver), is part of Gravel's Disgusting Creatures series, the other entry in which is The Fly, to be published simultaneously. It's recommended for ages 6-9.