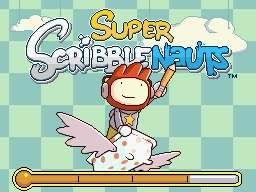 The gameplay is fairly simple: write words in Maxwell’s notebook to create objects, and use those objects to solve the puzzles. Sometimes the puzzles are simply of the ‘think of a word that fits’ variety, and sometimes they require a little more effort. I should say here that I’m not very far through the game, yet, so I suspect the later puzzles will generally be more challenging and less ‘name a part of car’.

You enter each puzzle from the constellation map screen. Having selected a constellation, you’re presented with a list of puzzles contained in that constellation; later puzzles are unlocked by completing earlier ones.

The stars with crowns are intended to be replayed: if you solve the puzzle three times in a row, each time with a different solution, the crown turns from silver to gold, as you see above. This is a pretty great feature, because a lot of the fun is in thinking of outlandish ways to solve puzzles, and the developers clearly knew this. I only wish I could see a list of my previous solutions, but that’s unfortunately unavailable. Probably, it would have been too difficult to make it meaningful–not only the selection of objects but also their placement and what you do with Maxwell can be important.

The puzzles are often amusing, even when they’re not difficult: you can kill the dinosaurs in the above screenshot in any number of ways–I particularly enjoyed using a black hole.

A surprisingly large number of objects are implemented, so feel free to let your imagination go wild. Super Scribblenauts keeps track of how many distinct objects you’ve created, and how many distinct adjectives you’ve used, too, so you can measure just how creative you are, if you’re so inclined. Personally, I’m keeping a list of my solutions for each level, just to see how many ways I can solve them.

Not all of the puzzles are particularly inspired, and some seem a bit obtuse to me, but in general, the game seems to be great fun. I definitely plan on finishing this one.