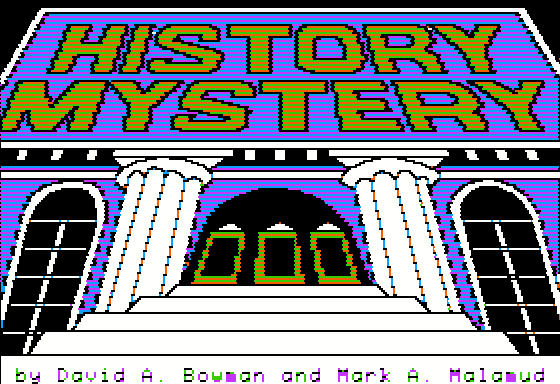 In the early eighties, the sudden popularity (and, indeed, the recent existence) of home computers gave rise to a new kind of publication: the disk magazine. These periodicals were published not on paper but on computer disks (and sometimes cassettes), and although the content varied, they generally featured computer programs (including games) in addition to, or even in place of, articles. The most famous of these are perhaps Softdisk for the Apple II (launched in 1981) and Loadstar for the Commodore 64 (launched in 1984). The medium flourished1 alongside more traditional magazines which might offer (inconvenient!) type-in programs. There was a price to be paid for this convenience: a single 'issue' of Softdisk cost about the same as an annual subscription to a paper magazine.

Among the many disk mags was Scholastic's Microzine for Apple II. Featuring (as you might expect) primarily educational content, Microzine began publication in 1983,2 continuing for about a decade. It also inspired a spin-off series, Microzine Jr., which was launched in 1988. Each issue of Microzine included four programs, one of which was a game.

Which all brings me to the subject of this article: History Mystery by David A. Bowman and Mark A. Malamud, which was included in Microzine #18 in November 1986. According to the 'Letter from the Editor' in that issue:

You play the part of "the ace reporter of your school newspaper, The Chronicle" (incidentally, of selectable gender), out to get a story about a stolen Babylonian hourglass. After chatting with the ghost of Mark Twain about the situation, you find yourself in the lobby of the museum.

The museum consists of 29 rooms3 which you must navigate, gathering items and clues to solve the mystery of the stolen hourglass, which the museum's ghosts believe is actually located within the museum. Each room has a description, seen on entering the room, and an entry in the self-guided tape-recorded tour, accessed by pressing T. The tour often contained educational information4 which might be used to solve the game's puzzles.

Some rooms have items to be collected, while others have ghosts to talk to or other objects to interact with. The game is in two parts (purely for practical reasons, I presume). Selecting the second part from the menu requires the player to input the password given at the end of the first part ("The Sands of Time") and begins the second part, in which the player must collect the hourglass and escape the museum while being chased by Winsome Slugg, the criminal who had stolen it.

Upon completing the game, the player gets a rather neat reward: the museum's gift shop, called "Amy Minkley's Gift Shop",5 will be renamed after the player. Not only in the ending text, either: in future playthroughs, the in-game name is changed. Which, I suppose, might make this the first game with a New Game+ feature.

History Mystery took me about an hour to complete, though I suppose it took me quite a bit longer when I was a child. I remember having a lot of fun with it, back then, and it's still neat as a bit of nostalgia, today.

I'll try to look at some more games from Microzine and other disk mags in the future. There's a lot to be said about them, and the resources on the internet are scarce at best. This post has been several years in the making, during which time I've been contacted a number of times by people who, like me, had fond memories of a game which might have been History Mystery, but who couldn't be sure. My thanks to them for providing me the impetus to do my civic duty and get this out there. Fans of old educational games, you are appreciated!