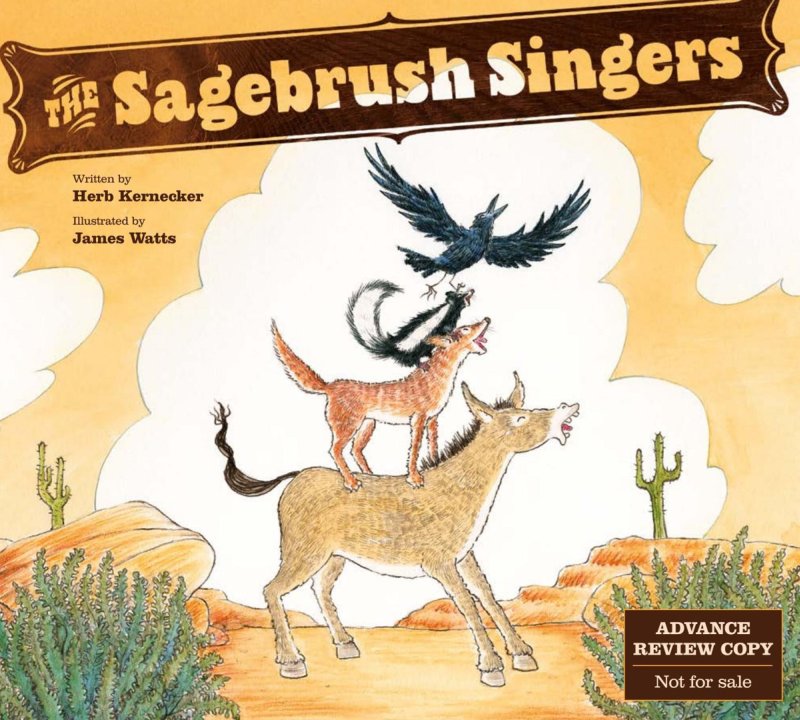 Four animals, dissatisfied with their lots in life, set out for the town of Big Creek to be musicians. Along the way, they encounter--and drive off--a band of rustlers and horse thieves.

Sound familiar? The Sagebrush Singers, written by Herb Kernecker and illustrated by James Watts, is a very close retelling of "The Bremen Town Musicians", as collected by the Brothers Grimm, set in the American southwest.

That's where the differences end, though; the story and the manner in which it is told are both very close to the source. For example, when the ass and hound come upon the cat, in "The Bremen Town Musicians":

It was not long before they came to a cat sitting in the road, looking as dismal as three wet days.

"Now then, what is the matter with you, old shaver?" said the ass.

Compare it with the scene in which burro and coyote meet the skunk in The Sagebrush Singers:

While crossing a wide arroyo they found little Skunk, lost and squeaking sadly.

"What are you complaining about, old stinker?" Burro asked.

The similarity is striking, and it's representative of the story as a whole. That's not to say that it's bad, but it is far from being original. The story is enjoyable enough, but that's because the original story was so.

Where The Sagebrush Singers does deviate from the original is in the motivation of the animals. In "The Bremen Town Musicians", the reasons the animals have fled their homes are an important part of the tone of the story: the ass has grown to old to carry the loads he once could; the dog has grown weak with age and is no longer any use in the hunt; the cat cannot run about after mice, as it did in its younger days; and the cock, though still useful, is to be killed and made into soup for company.

The animals in The Sagebrush Singers have slightly different motivations: the burro has been replaced by a truck, and feels lonely (and hungry) in his corral; the coyote is frustrated by people encroaching on his territory, always out to get him; the skunk has been chased away for become "a little too interested in the chicken coop"; and the raven is unhappy because of pollution.

I feel like the story of "The Bremen Town Musicians" is much stronger for the animals' motivations, and by contrast The Sagebrush Singers is weaker. It's no worse than many children's stories, but I think it's appropriate to compare a retelling to the original, and The Sagebrush Singers doesn't measure up.

I'm not the biggest fan of the art. It illustrates the scenes well enough, but it doesn't really add to the book. It's just decoration. The style is the sort of simplified and exaggerated line art that is generally used for comedic effect, with uninspiring colors. Looking at some of the artist's other paintings, it seems he favors understated coloration, but his choices here don't suit either the story or the line art very well. It's a shame, because I think a different choice of palette might have provided a lot of atmosphere for the desert setting.

I love folk tales, and I always enjoy seeing retellings of the classics. The Sagebrush Singers is a competent retelling, but it doesn't exceed the original in any way. Those interested in the Brothers Grimm particularly will probably want to take a look at it, but for everyone else, I wouldn't recommend going out of your way for this one.

Disclosure: this review is based on an advance copy received free for review.