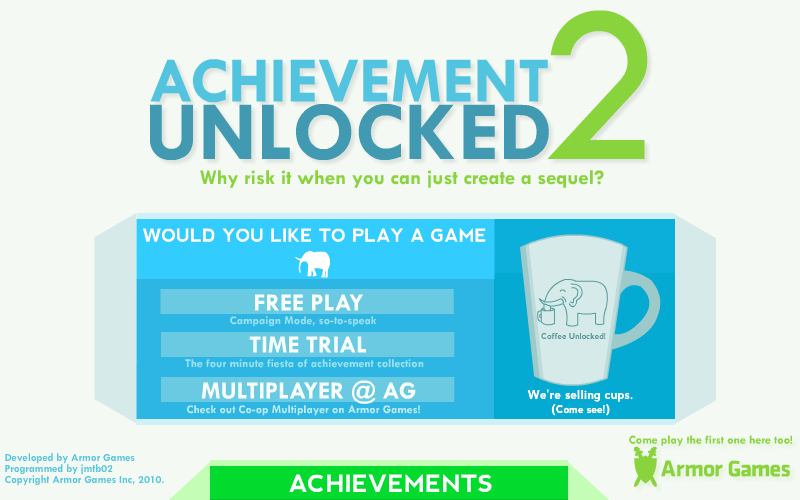 Achievement Unlocked 2 is a 2010 platformer by Armor Games.

Of course, it wouldn't be a worthy sequel if you couldn't unlock achievements just by starting the game, and this once again sets the tone for the whole game. There are plenty of achievements for things like clicking on interface elements, as well as the more 'traditional' sort for standing on certain squares or collecting all the coins in the game.

The main thing that sets Achievement Unlocked 2 apart from its predecessor is that it features multiple rooms. In a parody of the current DLC craze, though, you've got to buy the DLC to unlock the extra rooms, using the coins you collect in the game. In addition to the initial room, 'Floor 1', you have access to the elephant's home, as well as four more floors and the roof of the building you're in.

If you unlock all 250 achievements, you can see the ending... but is it really worth it?

One of the title screen's messages is "Why risk it when you can just create a sequel?", and the fake review quote in the shop for the second floor reads "If you like the first floor you'll probably like the second." These are certainly intended as parody, but they sum it all up pretty well. The second game in the Achievement Unlocked series is more of the same. If you've played the original, there's probably no reason to bother with this one. If you've never played the first, you can take your pick; either game will do.