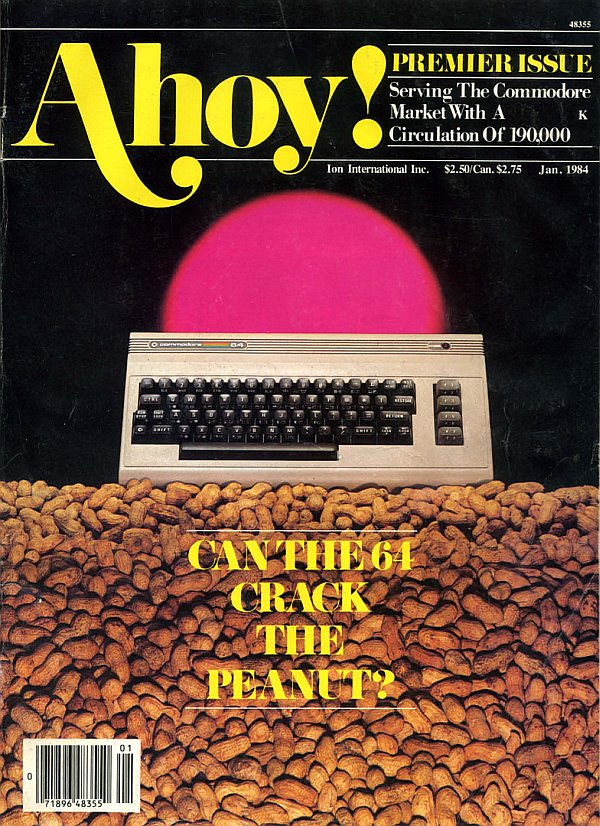 This is a piece of history, for sure, and an important one. Magazines like this related news about the still-developing home computer market, and are a great source of information about the computer world, as it looked in the eighties. More importantly, these magazines introduced countless people to programming; some learned by reading the articles that discussed programming, while others simply picked things up by inputting the type-in games and other programs these magazines usually contained. Their impact cannot be overstated.

Be warned: I go into a fair amount of detail, and quote pretty extensively.

Ahoy! #1 begins with an editorial by Ben Bova, "And a Little Child Shall Lead Them", which opines that we are at the beginning of the microcomputer revolution, and is very wide-eyed and optimistic about the coming days. Not without reason is Bova enthusiastic. As he says, "The child in us, the little kid that's delighted by Space Invaders or Pac-Man created a market that accounted for nearly $10 billion in sales last year." And, "Computer technology has advanced with breathtaking speed: if automobiles had improved their efficiency and cost as rapidly as computers have over the past twenty years, a Rolls Royce would be able to get more than a hundred miles per gallon of gas, and would cost less than $100."

Next is the Scuttlebutt department, featuring news on recent and upcoming hardware and software releases. There's some great stuff in here, for those interested in the history of computing.

The first item discussed is the Executive 64, a portable computer. As Ahoy! says: "Commodore has provided one alternative for the growing number of business travelers who find their computers significantly harder to leave behind than their wives. The portable (27.6 pounds), briefcase-sized (5" x 14.5" x 14.5"), $995 Executive 64 features an upper and lower case detachable keyboard, 6-inch color monitor, and single floppy disk drive with 179k capacity (second drive capacity)." Interesting what 'portable' (though I've heard those kind called 'luggable') meant, a few decades ago, given that modern portable computers have weights measured in grams and thickness measured in millimeters.

Another item of interest is Romox Terminals, from Campbell, California based Romox Inc. "The Programming Terminals contain the codes to five hundred or more games in several formats, including those of the Commodore 64 and VIC-20. At the same time, ECPC's, Romox's EPROM cartridges, will be made available to the public. One ECPC (edge connector programmable cartridge) can be purchased for fifteen to thirty dollars. If the purchaser doesn't like the game or grows tired of it, (s)he can take the cartridge to a Romox Programming Terminal and have it reprogrammed with a new game in minutes for a relatively low cost of one to twenty dollars. The cartridges can be reprogrammed many times over." Nintendo would have a similar feature for the Japan-only Famicom Disk System, a couple of years later.

Notice that this is pretty much an early form of digital distribution (the BBS being the more direct ancestor to Steam et al.), and Ahoy! muses that will be quite a boon to the industry. "This system represents an all new method of game distribution, and the industry will be watching the experiment closely. If the system works, retailers will have much more shelf space available. Software publishers will be provided with an instant glimpse of a new game's popularity. Smaller, newer game creators will be able to sell their games on a mass market basis without the costs and headache of manufacturing and distribution."

There's a long section discussing laserdisc games, like Dragon's Lair (recently re-released for Windows), and musing on future uses for the technology.

There is an interview with Guy Nouri of Interactive Picture Systems, who says "Our feeling is that the day of Space Invaders is dead. In the future, computer programs will not be so much shoot-em-ups, but activities. Learning software, not educational, but learning." IPS produced The Movie Maker, "a real-time animation system that requires absolutely no programming." IPS also has in development "a dance program, one which already contains a library of dance steps from which the users can select to arrange a sequence." I'm sure that one turned out to be a winner.

Other items featured in the Scuttlebutt section: an EPROM cartridge programmer, printers, two different speech units, Magic Desk (which introduced the desktop metaphor to the home market), various educational software from MECC (at $50 per item--about $110 in 2013 dollars), tax software, accounting software, weather forecasting software (costing $199.95 together with the weather sensor, "supposedly the same one used by sixty countries worldwide"), and lots of upcoming games, including [//Night Mission Pinball], which I reviewed previously.

The Computer as Communications Device

The next article, "The Computer as Communications Device" by M. David Stone, discusses the practical aspects of using a computer to connect to a BBS, including which modem or terminal software you should purchase, and why, as well as who you can call, once you've got them (CIS, Delphi, and The Source are recommended). Since it was about $150 for a terminal emulator and a 300 baud modem, this article would surely have been a worthwhile read.

Can the 64 Crack the Peanut?

Steve Springer contributes a 3-page article speculating on whether the Commodore 64 could stand up against IBM's rumoured 'Peanut' computer, supposed to be released sometime between 1983 and 1985. Of course, the 'Peanut' turned out the be the \PCjr, a dismal failure.

This article is mostly interesting if taken as a cautionary tale against excessive concern for rumour, a lesson that game journalists and others could stand to learn, even today.

Pete Lobl gives us "The Interrupt Music Maker/Editor for the Commodore 64", a type-in music composition program, and "The 64 Graphics System", a technical discussion of (you guessed it) the 64 graphics system, plus a type-in graphics program, Multi-Draw.

Robert J. Sodaro offers an incredibly positive "Interview with Bill Badser from Protecto Enterprises", which is followed by no fewer than ten pages of ads for Protecto. One wonders if Protecto offered to buy ten pages of ads on the condition of being given a three-page feature.

Dale W. Rupert writes the "Rupert Report", titled "Don't Curse that Cursor! Learn to Put It Where You Want It.", which discusses cursor positioning.

The "Commodares" section includes a couple of type-in utilities and a few programming puzzles.

Michael Kleinert and David Barron write "A Peek at Memory on the Commodore 64", which describes exactly what the 64K is used for, and "Programming Sequential Files on Your Disk Drive", which is just what it sounds like.

At the end of the issue is a glossary of computer terms, which jokes strewn about ("High resolution. High-quality graphics capability when applied to a video terminal. An individual software program may itself contain high-resolution graphics, meaning detailed or colorful graphics. A subjective term and therefore frequently abused (especially on New Years Eve).")