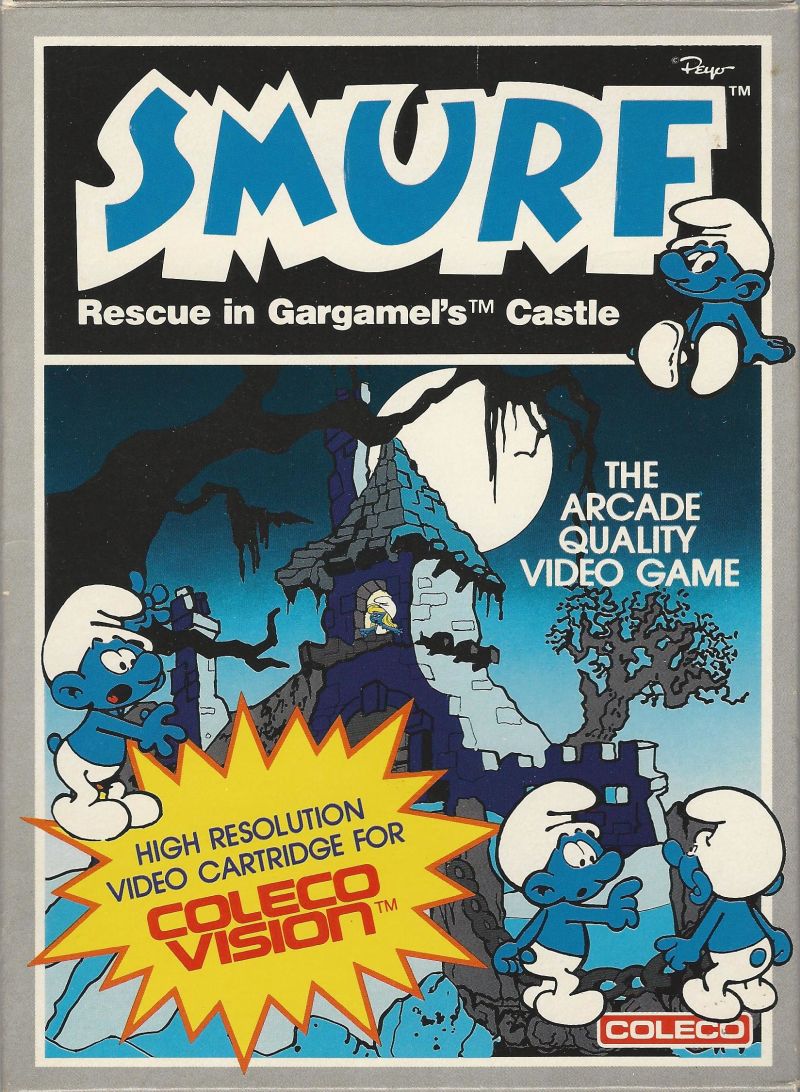 Since we've most recently looked at a couple of arcade-style single screen platformers, let's change it up a bit with something a bit more reminiscent of Pitfall!.

If Pitfall! had Smurfs, anyway.

Smurf: Rescue in Gargamel's Castle (also known as Smurf Rescue) is a 1982 release by Coleco for the Colecovision, also ported to the Atari 2600. The first thing you'll notice upon starting the game is that, compared to its contemporaries, Smurf Rescue is beautiful. It's got lovely, colorful, detailed graphics, and the animation is pretty smooth, too. It's even got some nice background music (from Simple Gifts and Beethoven's Pastoral Symphony, the arrangement of the latter sounding rather like a track from Pokemon, to me).

Our hero, called by the manual simply "Smurf", must jump over fences, tufts of grass, ledges, stalagmites, and other obstacles on his way to Gargamel's castle, where Smurfette is being held prisoner. Successfully making a jump awards points (helpfully printed on the screen), with more difficult jumps being worth more points.

The game features several different types of terrain. On the way to the castle, you'll pass through several screens of a type, and then enter another. You've got an energy meter which is constantly decreasing, but it is refilled when you encounter a new type of terrain.

When you finally reach the castle, and leap to Smurfette by way of a skull, you're awarded a large bonus and the game starts over. You keep your points, though, so you could keep playing to see how high a score you can achieve before running out of lives.

That's all on Skill 1, though. On the higher skill levels, there are enemies to avoid, as well. The hawks shown above will swoop around and chase you, so you've got to duck or otherwise dodge them. The game is much harder when you've got to contend with enemies, rather than just worry about making the jumps, and on higher levels there are more screens between you and the castle, and your energy depletes more quickly, too. For something that seems a cutesy kids' game, Smurf Rescue can definitely provide a challenge.

The game's weakest point is its control scheme. You'd think, given that the Colecovision's controller had an astounding fourteen buttons, they could have spared one for jumping, but, alas, it was not to be. You jump by pushing the joystick up. Furthermore, you can jump at two different heights, but to make a higher jump you must jump twice in quick succession, rather than something sensible like holding up on the joystick longer. When you've got to dodge enemies while carefully judging the right place to jump, this control scheme is a real pain.

Let me direct your attention to a solicitation for the game from a catalog:

There are a few things of note, here. First, "All screens shown in CBS Colecovision format." it proudly declares. The screenshot on the back of the game box is similar. But you'll notice that it doesn't match my screenshots above. I imagine the promotional shots were taken while the game was still in development, so we're getting a look at what might have been. The artwork differs a little from the box art, too.

Second, I don't believe it is possible to have 3570 points on the first screen. Maybe if you backtracked.

Third, the description states "And, to maintain his strength, he must eat hard-to-reach berries." There aren't any berries in this game. That's just an outright lie. Was there a feature like that at the time the promotional shots were taken, and the ad copy was written? It's hard to imagine that feature being removed at such a late stage, but it's possible. Or perhaps there was some miscommunication, or the ad copy was based on outdated design documents. I always wonder, when the advertising doesn't match the reality, exactly what caused it.

There were several different clones released on the Commodore 64: Smurfs by Carl Muller, Smurf Rescue (which had a followup, Smurf 2: The Revenge) by Courbois Software, and Smurfen by C.A.W. Brand and M. Brand (which features a rather cool rendition of "Billie Jean"). There have been more recent projects based on this, too, such as this neat little thing made in MIT's Scratch language, and this Amiga game by Mikael Persson, which unfortunately encountered legal trouble.

It's worth giving this game a try, just for a bit of variety. If you don't mind the controls, it's pretty fun.