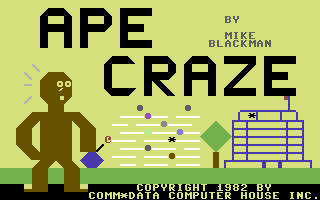 I said in my review of Miner 2049er that clones were the order of the day in the early eighties. For proof, one need look no further than Ape Craze, a 1982 release for Commodore 64 by Mike Blackman, published by Comm*Data.

What kind of game would you guess this to be? Does the name seem to hint at anything?

That's not a trick question. It's a Donkey Kong clone, though it does change things up a bit. In the first level, you begin at the bottom left, and must reach the exit at the top right. To hinder you, the ape constantly throws bombs across the top of the screen which drop and roll down to the bottom. If you're feeling brave, you can collect the... barrels?... objects scattered around the level for extra points. I do not recommend that you do this, however, because the game is very hard. Let's examine why.

First, there are a lot of bombs on the screen at once, leaving you with very limited options for reaching the top. Your best bet is to stand atop a raised section of girder, where the bombs can't reach, wait for a gap between bombs, and then jump to another safe spot. If you just brush a bomb from the side as it falls, it's game over. You can actually land on bombs safely (or stand atop the exit without the level ending) since it seems collisions are only checked from the side, but this is still quite difficult, because...

Second, the jump behaves very inconsistently. Sometimes, you'll jump up a full level. Others, you'll just make a short hop. Yet other times, you'll seem to catch an edge on the way up, and sail right on up another level. This doesn't seem to depend on how long you hold the button in (or, indeed, whether you hold it in at all or merely tap it). Considering that you've got to make precise jumps so as to dodge between waves of bombs, this is a pretty crippling flaw. And when you do jump, you'd better be very sure of your landing because...

Third, falling too far kills you. And the maximum safe height is only just greater than a single level, so if you jump, but miss and fall down a level, you die. Combine this with the unreliability of jumps and you'll be doing a lot of dying. Oh, and...

Fourth, you only get one life, and when you restart, the level is randomized slightly. That's actually a point in the game's favor, but it does mean that you can't plan out and perfect a route in advance--you've got to plan on the fly, every time.

If you do reach the exit on the first level, you're presented with this obvious copy of the rivet stage of Donkey Kong. Walk over the... bananas?... objects to make the girders collapse and complete the level. Since you mostly climb rather than jump on this level, it's actually much easier than the first (and a good thing it is, given the one-life-only situation).

Beat the second stage as well, and you get... the first stage, again. Actually, the US version of Donkey Kong did this as well, adding the remaining stages as you looped the game, but I believe these two stages are all Ape Craze has to offer..

Ape Craze is not a shining example of C64 gaming. I'd say it's a tolerable substitute for Donkey Kong, but the Atari 2600, ColecoVision, and Intellivision ports of DK were released the same year (and perhaps they were released before this game), so there were better options available.

The contemporary reactions to the game were entertainingly varied. From Steven Darnold:

The Midnite Software Gazette #13 had four reviews of this game. Selections:

Very hard to jump and only one try per game. Catchy, but tedious tune. Frustrating; not recommended.--Roy Wagner

The excellent use of music in the background of play still would not entice me to purchase the game.--JO

Count my vote for Roy Wagner. This isn't a game anyone is likely to want to revisit, unless they've viewing it through nostalgia-tinted lenses.

Mike Blackman programmed three other titles released by Comm*Data (Escape MCP, Pegasus Odyssey, and Sketch & Paint), but that seems to have been the extent of his contributions to gaming--if I read his LinkedIn profile correctly, his further programming endeavours were restricted to more 'serious' software.

This is far from the last Donkey Kong clone I'll be looking at, I'm afraid. Perhaps the next one will be better.