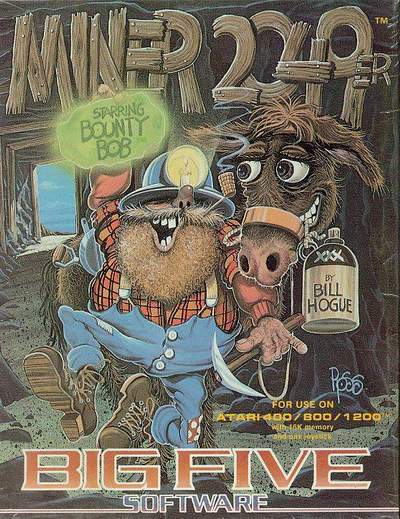 In the eighties, if any arcade game achieved success, there were sure to be dozens of home computer games 'inspired by' it released in short order1. Beginning in 1980, the California-based Big Five Software released nine games for the TRS-80, mostly very straightforward clones of arcade games (including three games based on Space Invaders). These achieved some success, but nothing compared to founder Bill Hogue's first game for Atari home computers, Miner 2049er, released in 19822.

The game's manual lays out the gripping story: you play the role of Bounty Bob, "the most loyal, heroic, and charismatic mounty ... ever known", who has been sent to capture Yukon Yohan, a fur trapper wanted for murder. Bob chased Yohan all the way to a uranium mine once owned by Nuclear Ned, and an explosion has trapped both Bob and Yohan within. The radiation in the mine has turned the creatures within into deadly mutants. Helpfully, however: "Scattered throughout the mine are various articles that have been lost by previous miners. Capture them by touching them and you will be awarded points. Additionally, the mutants will turn into green happy creatures that are now edible."

The goal of the game is to walk over every section of the platforms. Doing so fills the section in, and once every section is filled in, you're awarded points depending on how much time remains on the timer, and the next station begins.

There are ten stations in total, and a number of difficulty settings which increase the speed at which the enemies move.

Later stations feature a variety of extra obstacles: beginning with station 2, there are slides which you slide down when you walk over them; station 3 has transporters you may operate to move between sections; station 5 has moving platforms; station 8 has a lift you can use to reach high places; station 9 features that staple of platformers, the 'pulverizers' which descend to crush you; finally, stage 10 has a cannon which you must load up with TNT to blast yourself to higher platforms.

Miner was ported to more or less every game platform and released in many countries. Reviews praise its originality, though it clearly shows the influence of both Donkey Kong, with its platforms and ladders, and Pac-Man, with its powerups that allow the player to eat otherwise-fatal enemies. In its turn, Miner influenced later games, such as City Connection, which lifts the painting-every-square mechanic directly from Miner. Originality aside, it's obvious why Miner was such a success; it's fun, challenging, and has good, smooth controls.

A sequel to the game, Bounty Bob Strikes Back!, was released in 1984. A free Windows emulated version of both games is available from Big Five Software's website3.