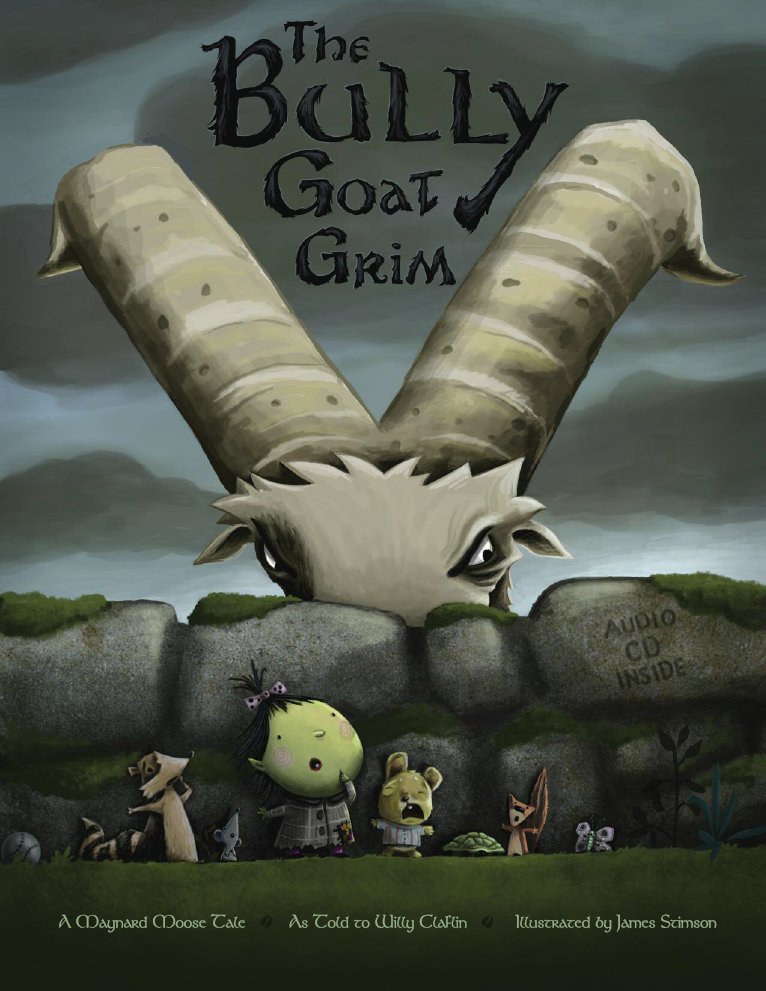 A family of trolls, having a lie-in after a late-night rude noises contest, is awakened by a huge billy goat with a bad case of Random Hostility Syndrome. It stomps across their bridge, shouting "Beware, beware, the Bully Goat Grim! Nobody better not mess with him!" However will they get back to their peaceful existence?

The Bully Goat Grim, written by Willy Claflin and illustrated by James Stimson, is a "Mother Moose Tale" loosely inspired by the story of the Three Billy Goats Gruff. In Claflin's version, it's the trolls living under the bridge who are the heroes, and the huge, mean goat who is the villain.

This goat, called Bully Goat Grim, is in the habit of finding unsuspecting woodland creatures, lowering his oversized head, and charging them. Soon enough, all the creatures around are in bandages and slings, hiding from Bully Goat Grim, so he takes out a map and heads for greener pastures.

On the way to said greener pastures is a bridge, under which lives a family of trolls: the mother with three heads, the father with two, and the daughter with only one. Bully Goat Grim makes a nuisance of himself, waking the family. The father gets into an argument with himself over how to deal with the situation, and ends up knocking himself out, and the mother discusses with herself until all three heads fall asleep, so it's up to the baby troll to solve their problem.

The baby troll realizes (being very clever for such a young troll) that "Nobody better not mess with him!" is a double negative, which means that she should mess with Bully Goat Grim. So she finds a pillow and constructs herself a parachute, then taunts the goat into charging her. When he does--poof!--the pillow absorbs the blow and the baby troll gets a free air ride.

Before long, all the animals in the forest have adopted the baby troll's idea.

The artwork in this book is very appealing. Not only are the illustrations funny, most are filled with interesting little details. When discussing what to do about the goat, for instance, the mother troll is eating Odin brand tyttebær syltetøy--Norwegian for lingonberry jam. Very appropriate, since the story of the Three Billy Goats Gruff is originally Norwegian!

The writing is unusual, but funny. It's got a lot of fake words (like 'distremely', above) sprinkled in, which the book explains is from the original story, told in the Moose language--the book's conceit is that Claflin is merely translating the stories told to him by Maynard Moose--and the grammar is nonstandard. If the story is performed, rather than merely read, these will work well, but they're a little distracting, when reading.

Willy Claflin is not only an author, but a singer and storyteller as well. With the aid of a number of hand puppets, he has performed full-time since 1983. For a sample, you can see him perform at the UMSL St. Louis Storytelling Festival 2012. The book comes with an audio CD recording of the story, though my review copy did not include this.

The Bully Goat Grim was published on August 1, 2012. It's available in hardcover or as an e-book for the Kindle.