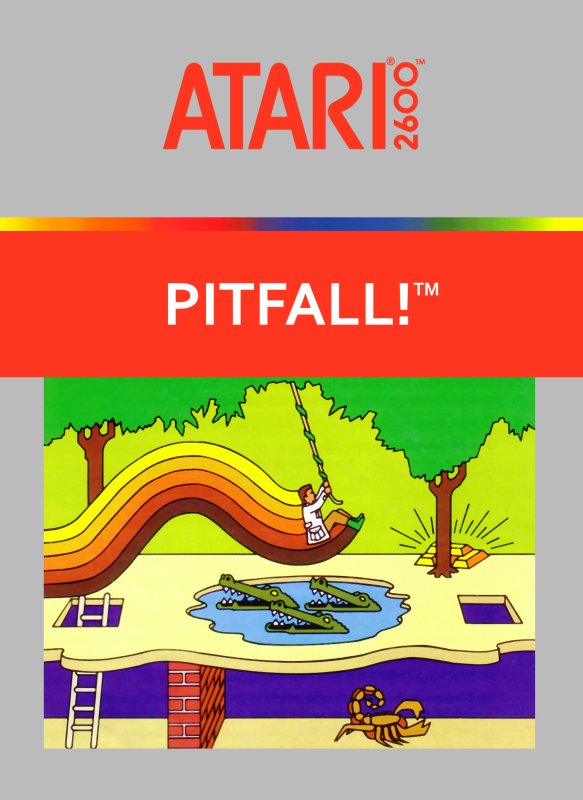 Since we're done with Space Panic and Donkey Kong (for now, though it has many, many ports, clones, and variants), we've come to the earliest platformer that I really enjoy: Pitfall! for Atari 2600, released by Activision in 19821.

Of course, one cannot talk of an Activision game without mentioning the game's designer. Pitfall! was created by David Crane, co-founder of Activision and creator of numerous other worthy games, including Little Computer People and A Boy and His Blob: Trouble on Blobolonia.

The creation of Pitfall! is what you might term a deliberate accident. Crane did not set out to create a platform game about a man in a jungle. He had been planning a sports game (later released as The Activision Decathlon) which he shelved because he felt he couldn't do it justice. He had, however created a subroutine to animate a running man, which he wanted to use somehow. So he started to build a game around it2:

That game, called Jungle Runner during development, became Pitfall!, went on to sell over 4 million copies on the 26003 (spending 64 weeks as the #1 best selling game), and was the progenitor of the smooth running and jumping that would be seen in the Mario series and many other, later platformers.

When the game begins, you have 2000 points and two extra lives (which the manual calls 'replacement Harrys'). The first screen is a gentle introduction: a single pit with a ladder and a stationary log are the only obstacles present. Falling into one of these pits (rather than climbing down a ladder) will cost you 100 points, while hitting a log will cost you some points over time as you remain in contact with it.

From the beginning, and at any point during the game, you can go either to the right or the left (unless there's a wall in the way).

The screen immediately to the right is more challenging: it contains three pits, only one ladder, and two logs rolling toward you. We can see immediately why (as the manual suggests) it is easier to go to the left--the logs always roll from right to left, so by moving in the same direction as the logs, you never have to worry about jumping over them. But where's the fun in that? Onward to the right!

More obstacles. This time, the rolling logs are joined by a wide pit--falling in this kind of pit means losing a life. Fortunately, there's a vine above the pit you can use to swing across, so it's merely a matter of timing the jump correctly to grab onto the vine, and then dropping off on the other side. In later screens, these pits will sometimes open and close, so you've got to be careful--a screen that seems safe may turn out to have a pit that opens under your feet, if you just run across incautiously.

In this image we can see the remaining (major) obstacles in the game: crocodiles4 and scorpions. The crocodiles periodically open and close their mouths. When the mouths are closed, you can jump on them to get across the pool of water. When the mouths are open, you can only stand on the far right side of the crocodiles' heads, behind the jaw, or you'll be eaten. The scorpions merely move from left to right in the underground section, but they're very wide, so precise jumps are necessary to make it over them.

So, if those are the main obstacles... what's the point of this game?

Collecting treasure for points, of course! The gold bar you see above is worth 4000 points. Silver bars are worth 3000, money bags are worth 2000, and diamond rings are worth a whopping 5000 points each. There are eight of each type of treasure, for a total of 32 treasures worth 112,000 points. A perfect game would end with 114,000 points (all the points for the treasures, plus the 2000 you started with, and no points lost to mistakes).

The game would be difficult, but manageable if you could just take your time with each screen. You might lose a few points to logs and other hazards, but with enough care around the deadly obstacles, collecting all 32 treasures would just be a matter of time. But time isn't something you have to spare: there are 20 minutes on the clock when you start, and that's all you get. It might sound like a pretty long time, but there are 255 screens in Pitfall!, leaving you with less than five seconds per screen, if you must visit them all.

How ever could you succeed with such a tight time limit? That's where a clever mechanic comes into play. You've seen that each screen has an aboveground and underground part, the latter reached by either falling down a pit or climbing down a ladder. Every screen that you cross in the underground section is equivalent to three screens crossed in the aboveground section. Of course, you could skip right over a screen with a treasure on it, if you take the underground shortcuts through the whole game. So what are you to do? The manual suggests making a map5.

You don't have to get every treasure, of course. I was pretty happy getting just under 32,000 points, after a few tries. Back when the game was released, Activision offered to send an Explorers' Club patch to anyone who got at least 20,000 points and sent in a picture of the TV screen to prove it.

Pitfall! is a great early platform game, and its sequel Pitfall II: Lost Caverns was if anything even more impressive and ahead of its time. Anyone curious about where platformers came from should absolutely give it a try. And even if you're not a game historian, it's a fun game well worth playing.