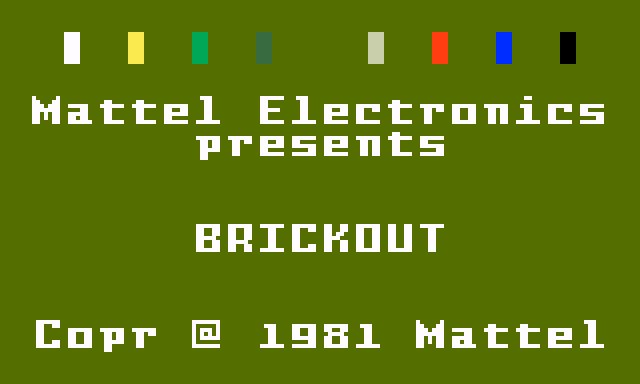 Nearly ten years ago, now, I wrote a 'first impressions' review (included below) of Brickout! for the Intellivision. I was pretty hard on the game, and I've learned some things in the years since that review, so in the interest of fairness, I'd like to take another quick look at it.

The story of Brickout! starts with another cartridge, Triple Action, a multi-game compilation programmed by Rich O'Keefe, containing games inspired by Atari products, developed under the working title Some of Theirs. Originally conceived as containing six, and later five, games, in the final cut two more games were removed as being too similar to Atari games (thus inviting legal trouble), one a Pong clone, and the other--Brickout!.1

Unlike the Pong clone, which to my knowledge does not survive, the excised Breakout clone found its way onto the 1998 Windows and Mac compilation Intellivision Lives!, along with about fifty other games and numerous extras.2 It has since been included in other products such as the Intellivision Flashback reproduction console.

So, does this history lesson change my opinion of the game? Not really. The ball is still tiny, the collision detection is still bad, and the lack of a paddle controller is still disappointing. It's more forgivable in an unreleased prototype, though. The video game market was already well on its way to the surfeit of low-quality clones that preceded the great video game crash, so it's in some ways comforting that this game was kept back, even if it was for pragmatic rather than artistic reasons.

So, my prior recommendation stands: if you want to play a Breakout clone, Arkanoid is a much better choice. But, maybe, if you're in an academic mood, it wouldn't hurt to take a glance at Brickout!, too.

A foray into other consoles with the Intellivision's Brickout!. It’s clear just from the name that it’s a Breakout clone, but is it a good one?

It’s very simple. You get 20 lives, you move the bat along the bottom of the screen, the ball destroys the bricks it hits. This wouldn't make it a bad game, by itself; it would only make it an overly simple one. The problem is that this game has such bad collision detection that the ball will slide through the corners of the bricks occasionally. It will get stuck in a row and take the whole row out. Not bad things, right? They make it easier, yes? They do, but I’d prefer some challenge.

But the game does provide that. Since the game is old (I suppose), its controls are somewhat lacking, and the framerate is just bad. The ball is minuscule in comparison to the bricks or the bat, so it’s not that hard to lose track of it. It’s not too clear, when the ball is moving at a shallow angle, where the ball will be when it is on a level with the bat. Now, perhaps these things are minor, and I am just bad at the game, but either way, I won’t soon play this again.

Verdict: Arkanoid is better in every way. Play it instead.