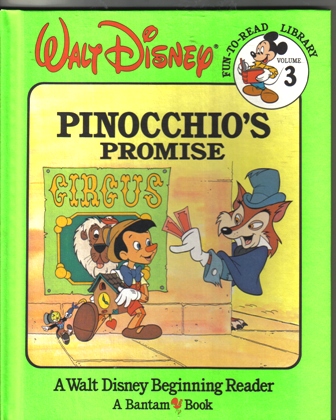 Pinocchio's Promise tells how Pinocchio breaks a promise he made to Geppetto, and the trouble it caused him.

In this story, Pinocchio promises Geppetto that he will take a clock to a customer and then come right home, but he is stopped along the way by Foulfellow, who tricks Pinocchio into giving him the clock in exchange for circus tickets. Nothing good can come of Pinocchio's breaking his promise, though: the tickets are no good, most everyone he meets seems to be trying to make him unhappy in some way, and he is nearly eaten by a lion. Ultimately, he tells a police officer what has happened with the clock, and they apprehend Foulfellow. Pinocchio takes the clock to the customer, and upon returning home, learns that Geppetto had planned to take him to the circus that day--but since he had taken so long to return, it was too late! Pinocchio, properly chastised, promises to keep his promises, in the future.

Disproportionate punishment is the usual theme in Pinocchio stories, and this story is no exception. I suppose that the authors feel that children are particularly dense. Well, perhaps they're right. Sadly, all the really happens in the story is Pinocchio being pushed from one misfortune to another. It has none of the charm of Mickey Meets the Giant.

The illustrations are great. There are quite a few lovely, full-page illustrations (with the text in an unobtrusive part of the image)--though Geppetto's fireplace in the beginning doesn't seem to be attached to a chimney!

Like Thumper's Little Sisters, Pinocchio's Promise is a rather disappointing story saved by excellent illustrations. Good enough to read once, but not a story you'll keep coming back to.