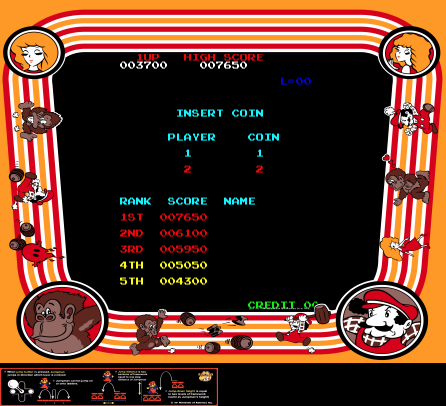 Donkey Kong is a platformer, released by Nintendo on 9 July 1981.

With the proto-platformer Space Panic and its clone Apple Panic out of the way, we can look at something a little more familiar. Though Donkey Kong clearly owes certain design elements to Space Panic, it adds the ability to jump. Without this ability, Space Panic plays more like a maze game than a modern platformer. Donkey Kong's kinship to modern platformers is clear.

Donkey Kong consists of four stages, which are presented differently depending on the port. To quote from Arcade-History:

There are further differences on console and home computer ports of the game--and Donkey Kong has been ported many, many times.

Each stage has its own goal. In the first, it is necessary only to reach the top of the screen, where Pauline stands, dodging barrels and fireballs along the way. Other stages are more complicated.

Donkey Kong is quite good, for its age. The visuals and sound are simple, but attractive, and Jumpman's movements are smooth and responsive.

It's a fine game in its own right, but its influence on later games cannot be overstated. Donkey Kong certainly had some direct influence on later platformers, generally, but it also gave us two characters--Donkey Kong himself and Mario, initially called Jumpman--who would go on to greater glory. There were two more arcade games in the Donkey Kong series, Donkey Kong Jr. and Donkey Kong 3, and Donkey Kong would go on to star in the Donkey Kong Country series of platformers, and make appearances in many other Nintendo games. Mario, of course, is the star of a massive and ever-growing series of his own, beginning with an arcade game, Mario Bros., and continuing in scores of games on every Nintendo console and handheld since.

Personally, I don't care for this style of platformer much, but I feel indebted to Donkey Kong for the great games that came after. I'm planning to work my way through as many platformers as possible, so there'll be plenty of both kinds, coming up.