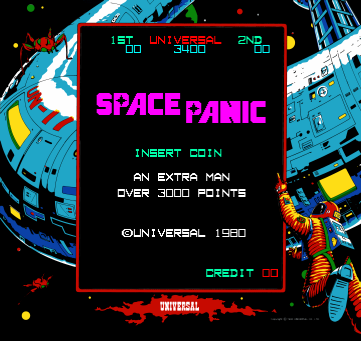 Space Panic is an arcade platform game, released by Universal in November 1980.

The gameplay of Space Panic is fairly simple. The player character is an astronaut with a shovel and a horde of hostile aliens. Naturally, you use one to deal with the other. The game screen consists of five levels of platforms (not counting the bottom floor), connected by ladders. Both the player and the aliens can move about these platforms and climb the ladders. The player is killed by contact with any alien, but his weakness is offset by an additional power: he can dig a hole in any of the upper five platforms. Should an alien fall into the hole, he can fill the hole in, causing the alien to drop down and die. A new level begins when all aliens have been killed.

As an additional complication, some aliens must fall more than one floor to be killed. For these, it's necessary to dig aligned holes through two or more levels of platforms, so that an alien falling from the higher platforms will continue through the holes in the lower platforms, eventually falling far enough to die upon landing.

Space Panic supports one or two players in alternating play.

The Casio PV-1000 is quite a rare console, but the Video Game Console Library has a screenshot of Space Panic running on that system. It appears to be substantially similar to the arcade version, if much less attractive.

The ColecoVision port has one major difference from the arcade version: it has one fewer level of platforms, since the screen is wider than it is tall. Other than this, the game is essentially the same.

Space Panic was a highly influential game. Its platforms-and-ladders structure would be emulated by many later games, including Nintendo's Donkey Kong. In addition to the official ColecoVision and PV-1000 ports, the game inspired a number of clones, including Brøderbund's Apple Panic and Eaglesoft's Panique. The digging mechanic (which, Wikipedia informs me, was likely inspired by Heiankyo Alien) was also used in Brøderbund's Lode Runner. Ultimately, Space Panic inspired future platform games like Super Mario Bros. and its ilk.

For being the first platform game, Space Panic is surprisingly playable. It's simple, but fun. Fans of platformers interested in a bit of history should check it out.