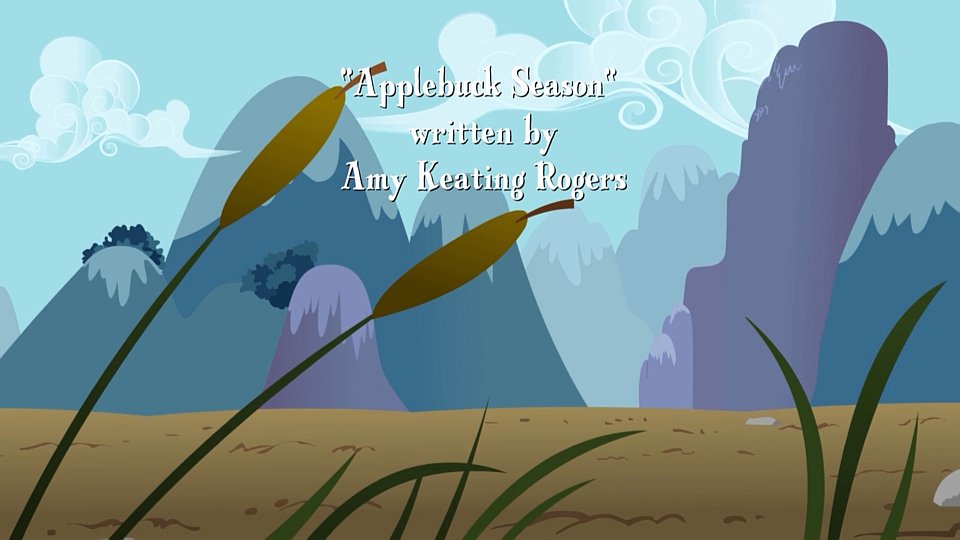 The fourth episode the first season of My Little Pony: Friendship is Magic aired on November 5, 2010. It is called "Applebuck Season", and was written by Amy Keating Rogers.

Sweet Apple Acres has produced a bumper crop of apples, but Big McIntosh, Applejack's brother, has been injured. He believes that there are too many apples for Applejack to harvest alone, but she swears she'll harvest every one by herself.

Applejack is a pony in high demand, however. As she's about to start work, a herd of cattle begins to stampede toward Ponyville. Fortunately, Applejack's expert rodeo skills allow her to divert them before they cause any harm. When the citizens of Ponyville have a party in her honor, a week later, Applejack only just shows up in time to receive her award, and is so tired that she dozes off during the award ceremony.

When Applejack later tries to help Rainbow Dash perfect a new trick, the usually athletic pony's lack of coordination ruin's Rainbow Dash's practice session. When helping Pinkie Pie bake some muffins, she misunderstands the recipe, creating muffins that sicken the ponies who eat them. When assisting Fluttershy with the bunny census, Applejack's growing irritability leads her to frighten the rabbits into stampeding through the town, eating all the gardens as they pass through.

Throughout these events, Twilight Sparkle tries to get Applejack to accept some help with her apple bucking, but Applejack is as "stubborn as a mule" and insists on doing all the work herself. Finally, when she believes she's finally finished, Big McIntosh points out that there are still many trees yet to be harvested. She realizes that she can't handle the whole job alone, and accepts her friends' help. Together, they finish the job with ease.

I mentioned that the previous episode hinted that Twilight should have asked Celestia for help. This episode is all about asking for help.

Applejack is used to being the pony that everypony can depend upon, but when she needs help herself, she's too stubborn and prideful to ask for it, or accept it when it's offered. However, by trying to go it alone, not only can't she manage her own responsibilities, she can't help her friends, either. Twilight's letter to Princess Celestia sums this one up very well.

This whole episode works toward communicating one lesson, and it works very well. Full points for the lesson, this time.

Another fun episode. The feeling of everything building up to Applejack finally accepting her friends' help is nice. The lesson is again a good one, and it's presented more directly that last episode's lesson, which isn't a bad thing. If I were pressed, I'd have to say that I like The Ticket Master better; it gives us more insight into the characters. Still, "Applebuck Season" is a solid episode.

This episode focuses on Applejack, so we learn a bit about her. She's stubborn and prideful, it turns out, but she's also got a lot of positive qualities. She refers to herself as "the loyalest of friends and the most dependable of ponies." Twilight calls her "a pony we can always count on to help in matters great and small." Rainbow Dash says she is Ponyville's best athlete, and Pinkie Pie says she is the best baker ever.

We also learn that Applejack and Big McIntosh pretty much run Sweet Apple Acres by themselves; the crowd of family members we saw in the first episode were just in for the Apple family reunion. We'll get to see more of Applejack's family, later: Apple Bloom features in several episodes, starting with Call of the Cutie; Granny Smith stars in the second season episode, Family Appreciation Day.

I noted previously that the main characters work to support themselves. In this episode, we learn that Pinkie Pie works at Sugarcube Corner, and that this week, she gets to run the shop for the first time. Unfortunately, things don't go so well for Pinkie, or for anyone else who sampled the "baked bads."