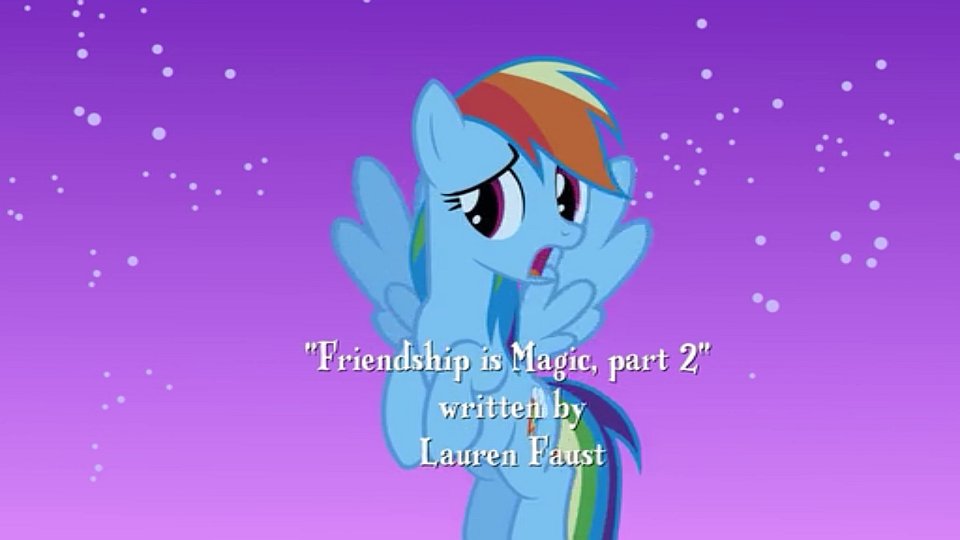 In the previous episode, Nightmare Moon returned from her thousand-year imprisonment to bring eternal night to Equestria. Now, with Princess Celestia missing, Twilight Sparkle intends to find the Elements of Harmony so that she can defeat Nightmare Moon, rescue the princess, and save Equestria.

The five ponies Twilight met the previous day insist on coming along to help Twilight, so together they venture into the Everfree Forest, a creepy and unnatural place, which apparently doesn't work the same way as the rest of Equestria. There, they must overcome several tests of their new friendship.

Together, the six ponies defeat Nightmare Moon, and it is revealed that Nightmare Moon is in fact Princess Celestia's younger sister, Luna. Celestia and Luna rejoice at their reunion, and they all return to Ponyville.

Twilight Sparkle is sad that she will have to leave her new friends, so Princess Celestia assigns her to remain in Ponyville and study the magic of friendship.

The ultimate lesson is that the power of friendship can overcome anything. Along the way, there are several more lessons to be learned about the value of honesty, kindness, courage (though it's termed laughter, here), generosity, and loyalty. I've given some details about these below, under the heading "The Trials".

The lessons are good, although I'd question the effectiveness of the presentation. In particular:

The lesson about honesty comes across simply as "trust your friends", and it's very strained. I imagine it was difficult to work honesty into the episode in a dramatic way. Unfortunately, this continues to be a problem in future episodes, as well.

The lesson about kindness, "sometimes we all just need to be shown a little kindness", as Fluttershy puts it, also doesn't work that well. It seems like Fluttershy just got lucky.

The others work better, and Rainbow Dash's segment, teaching about loyalty, fits in particularly well.

This episode is even better than the first. We get a nice quest, everypony plays a part, and the lesson is good. If I've got a complaint, it's that there's not much tension--all the problems are resolved very quickly. However, there's a lot of action to fit into a single episode, and the ending is great, so this flaw can be forgiven.

While in the Everfree Forest, the ponies must overcome several trials before they can reach the Elements of Harmony.

First, the ground falls out from under the ponies, sending them hurtling toward a cliff. All but Twilight are able to stop themselves safely. Applejack grabs Twilight, but then tells her to let go and fall off the cliff, and she'll be safe. Twilight is understandably skeptical of this. Applejack emphasizes that she is being honest, and Twilight trusts her and is caught by Fluttershy and Rainbow Dash before she falls to the ground. It works out well, but I can't imagine why Applejack didn't just tell her that the others were waiting to catch her. Or why they didn't just push her back up over the cliff. As the plot demands, I guess.

Next, the ponies encounter a huge and angry manticore. They try to fight it individually, to no avail. They prepare to all rush it together, when Fluttershy interposes herself between them and the beast. As it turns out, the manticore had a thorn in its paw. After Fluttershy removes it, the manticore is a sweet as a kitten. Twilight asks how Fluttershy knew about the thorn, to which Fluttershy replies: "I didn't. Sometimes we all just need to be shown a little kindness."

Then, the ponies encounter some very creepy looking trees, which, given the circumstances, frighten them--all except Pinkie Pie, that is. She advises them that the trees can't hurt them, and that they should just laugh and make them disappear, in the series's first musical number. Since the monstrous appearance of the trees was just an illusion, this works, and they proceed.

A little further along, they encounter a river which has been churned up so as to be impassable. As it turns out, it has been churned up by the anguished thrashing of a sea serpent whose lovely moustache has been severed. Unwilling to allow this crime against fabulosity, Rarity cuts off her own tail to serve as a replacement moustache. Delighted, the serpent provides his own body as a pathway for the ponies to cross.

Finally, the ponies are in sight of the location where the Elements of Harmony are kept, when a broken bridge stops them. Fortunately, Rainbow Dash is able to fly across and repair the bridge. However, when she reaches the far side, three ponies stop her, and introduce themselves as the Shadowbolts, the best flying team in the Everfree Forest, and soon in all of Equestria. They offer to make her the captain of their team, if Rainbow Dash will abandon her friends and come with them. Rainbow Dash refuses them, though, because, as she says: "I'd never leave my friends hangin'."

In this episode, we get our first look at Princess Celestia, the ruler of Equestria. She's a winged unicorn, and much larger than the rest of the cast. She appears to have a close relationship with Twilight, if their interaction when she first appears is any guide. She also turns out to be at least a thousand years old: she's the pony described by the storybook at the beginning of the first episode, and Nightmare Moon is actually her sister, Princess Luna.

We first met Luna in another guise, as Nightmare Moon, in the previous episode, and we see her thus again in this episode. Once Twilight and her friends use the Elements of Harmony to defeat her, though, she appears changed, and much smaller. She and her sister, Princess Celestia, are reunited at last, and return with the others to celebrate in Ponyville.

Luna won't be seen again for over a year, in the fourth episode of the second season, "Luna Eclipsed". She'll have a rather different character design, then, too.