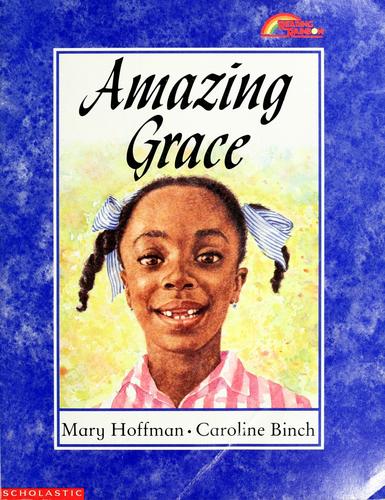 I'll let the book speak for itself:

The story is wonderful and Grace is a kindred spirit to many a reader, each of us a Walter Mitty. She has such personality that one cannot help but become attached to her after only a few pages. When we read that Grace's class is going to put on Peter Pan and that "Grace knew who she wanted to be," we can see the conflict coming--Grace's classmates tell her that she can't play Peter Pan in the class production of the play because Peter is a boy (and besides, Peter Pan isn't black)--but Grace's resoluteness in the face of her classmates' doubts is admirable.

Grace is strong, but she's not invulnerable. When she gets home, her Ma and Nana can see that something is wrong, and they reassure Grace. Then, on Saturday, Nana takes Grace out to see a ballet production of Romeo & Juliet, starring Rosalie Wilkins, "from back home in Trinidad," as Juliet. After this, Grace knows that she can be anything she wants. And when the audition comes for the part of Peter Pan, she proves it--because Grace is amazing.

Binch's watercolor illustrations are excellent. The backgrounds are mostly simple or nonexistent, but it works well, since the focus is on the people, and the artwork portrays them with a great deal of character. The expressions and body language of the characters add substantial depth to their characterization in the text.

The realistic artwork is very well suited to the similarly realistic story. The poses are lifelike, the colors are vivid, and on the whole the art is pleasing to look at. There's a nice balance between complete scenes on one or two whole pages and smaller illustrations.

This is a fantastic book. It was a BCCB Blue Ribbon selection and a Horn Book Fanfare selection in 1991 and was featured on Reading Rainbow in 1993. In 1995, Hoffman published a sequel, Boundless Grace, also illustrated by Binch.

Amazing Grace is recommended for grades 1-3.