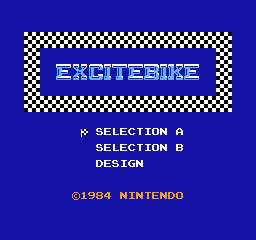 Excitebike, released by Nintendo in November 1984 in Japan, and October 1985 in the US, is a classic racing game for the NES.

Two modes are available, Selection A and Selection B. In Selection A, you race against the clock, alone on any of five tracks.

You play the red motorcyclist, and must pass the required number of laps on each obstacle-strewn track before time runs out. If you fail to beat the third place time, you lose. Since you can select which track you want to play on, this isn’t such a big deal,though, and the early tracks are pretty easy.

The track consists of four lanes, which you can switch among with the up and down buttons. In addition to changing lanes, you have the choice of the slower or faster gear for your bike. The faster gear has an obvious advantage, but also a disadvantage: as you use the faster gear, your bike heats up, and if you keep it up too long, your bike will overheat, forcing you to wait on the sidelines until it cools off again. Using the slower gear will allow your bike to cool, as will running over arrows that appear on the track. As a result, much of the strategy involves knowing when to use the faster gear and when to take it slower. Use the right gear and avoid or manage the obstacles, and you shouldn't have much trouble until the last two tracks.

In Selection B, you still must beat the clock but there’s an additional difficulty: other racers appear on the track.

The other racers don’t seem to be intelligent–they don’t seem to try to block you intentionally, but they do get in the way, and running into them can cause a crash, costing you precious seconds. This mode is a little more interesting than Selection A, because of the added difficulty, but play is basically the same. I’d suggest playing Selection A if you’re trying to get the best possible times, and Selection B if you just want to race.

In addition to the two play modes, there’s a design mode, which lets you select from the available obstacles to make your own track.

You can try to make some interesting tracks this way, and it’s a little amusing, but the inability to save means that it’s a bit of a waste to spend much time trying to make a really good track, since it’ll be gone when you power off the console. It’s not that there isn’t a save option–it’s right there on the menu, and will happily spend a few minutes claiming to save, but it’s intended for use with the Famicom Data Recorder, a cassette attachment which was never released outside of Japan. The rest of us are out of luck.

AI: 6/10
The computer-controlled racers provide a little extra challenge, and a little extra scenery, but it would have been nice if they were aggressive and tried to keep you from passing.
Gameplay: 8/10
The game controls smoothly, and it’s really quite fun. If it had more tracks and supported two players, it might get a perfect score. Even without these, Excitebike is an excellent racing game.
Graphics: 8/10
Ordinarily, I say you should never to anything 3D on the NES, but Excitebike pulls off the 3D obstacles very well–it’s easy to see how tall they are and what slope they’re at, which is the most important thing for this game. I can’t score this any higher, though, because the tracks are pretty bland, and the most variation we get on different tracks is a palette swap. Not bad, but they might have done a little more.
Sound: 4/5
I’m only counting this half since there’s no background music during the races, just sound effects. That said, what sound exists is not bad, but a little repetitive. Like [Indy 500], the main sound we hear during the race is the constant roar of the engine. Unlike Indy 500, that is actually useful since you can tell how hot your bike is by the sound of the engine. It still gets a little old, but at least it’s functional.
Personal Slant: 10/10
Whatever shortcomings Excitebike has, it’s still quite a fun old game, and I have very fond memories of it. Especially given it’s age (it was one of the first NES games, 25 years ago), I can’t really find fault with it.
Total: 8/10
Fun fact: Excitebike fit on only 24K of ROM. By comparison, this review, together with the five screenshots it contains, takes up about 23K–just about the same size as the game that is its subject! There’s certainly a lot of excellent gaming packed in such a small size. This is one game that’s absolutely worth playing, and since I understand that it’s available on the Wii virtual console we all have the good fortune to be able to play it, even if we can’t find a working NES.