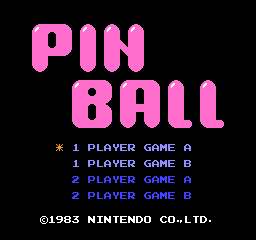 Pinball was released by Nintendo in February 1984 in Japan and October 1985 in the US, and, as the name suggests, is a simple pinball game.

Pinball features two pinball screens and a bonus screen. An extra ball is awarded for every 50,000 points, and the flipper becomes invisible while your score is between 100,000 and 150,000 points. Each screen has a way to place a block post between the flippers to prevent your ball from falling, and several special ways to get large amounts of points.

After releasing the plunger, the ball goes to the top screen, and falls through one of the three lanes to score 500 or 1,000 points.

Putting the ball through the green lane on the right causes the penguins in the center to act like a slot machine, and hitting the moving pink slot target will cause them to stop on either 3, 7, or a penguin. Matching them scores points and causes a block post to appear between the flippers.

Putting the ball through the upper left lane causes the seals to bounce balls on their noses, activating the 100 piont bumper in the middle. Between this and the dots filling that lane, this scores 2,800 points.

The counter at the upper left awards the shown number of points when it is hit, increasing each time by 100 points, up to a maximum of 1,000 points. It resets when you put the ball through the left lane.

The four targets on the left award a 1,000 point bonus when you hit them all. The hole on the lower right only kicks the ball back if you fall in it; the ball exits from that hole when leaving the bonus screen.

Falling from the top screen doesn’t lose the ball, but rather drops it to the bottom screen.

On the bottom screen, there are a few features of note. Passing through the lanes at the top flips over the cards. When all the cards are flipped, a 5,000 point bonus is awarded, and a block post appears between the flippers.

Hitting all seven of the targets on the left awards a 1,000 point bonus, and removes the pink bars on the right, allowing you to relaunch the ball.

The three eggs above the flippers hatch when hit once, disappear when hit again, and turn back to eggs when you pass over them a third time. Causing all three eggs to be hatched at the same time adds stoppers to the outlanes. Between this and the cards, it is possible to keep the ball quite safe, though these stoppers do disappear once they are hit once.

Finally, the hole in the upper right leads to the bonus stage.

In the bonus stage, you control Mario. You’re supposed to run beneath the ball to bounce it back up, rather like breakout. Unlike breakout, though, the floor beneath the girl shrinks when the column of lights beneath it are turned the same color. The colors change whenever the ball rolls over them. When the floor disappears, the girl falls, and you must catch her and allow her to walk off to the left or right. Doing so awards you 10,000 points and restarts the bonus level. The level ends if the ball falls to the sides, which causes it to pop out of the hole on the top screen, or the girl falls without you catching her, which will cost you your ball.

That’s the whole game! The difference between the A and B games is that the ball is heavier in the B games, making them more challenging. It’s a fairly simple game, but it’s pretty well done. The controls are pretty good and the graphics aren’t bad. There’s no music in the game, but the sound effects are nice. I’d say that if you like pinball games, this one is worth a try. It lacks the accurate physics and detail of later pinball games, but it’s still a fun diversion.

(An FAQ by Luke Jozwiak provided the details on the point values.)