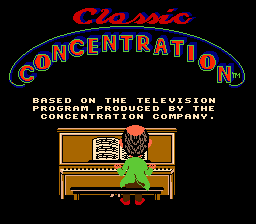 Classic Concentration is an NES game adapted from a 1980′s television program. It was published by GameTek, Inc. and developed by Softie, Inc.

When you begin, you are given to opportunity to choose your name and avatar, and whether you’ll play against a human or the computer. Then a five by five grid of doors is shown, with one door removed. The back sides of each door contain one of twelve prizes, and the goal for this part is to match them in pairs so the doors are removed.

Here, I’ve chosen a ‘wild’ door. Whichever door I choose next will be removed along with its mate, and the prize indicated on the reverse will be credited to me. With save states facilitating my choices, the computer had no chance.

After removing a pair of doors, the part of the background image that was hidden by the doors is revealed. The image is a rebus puzzle, which the player must solve. The player is given the opportunity to solve the puzzle after removing each pair of doors–it is not necessary that all doors should be removed before solving the puzzle.

The game is fairly forgiving of spelling errors–perhaps too forgiving, since it is possible to solve the puzzle without actually knowing what the rebus is supposed to be, just by putting in a pretty close approximation of what the pictures represent.

After two rounds of this, the winner gets to play the bonus round, which consists of fifteen doors, each with the name of a car on the reverse. There’s no rebus in this round; instead, the round is timed. If the player matches the seven pairs before time runs out, he wins a car.

At this point, the game ends, and the player is given a code to replay the same game, should he so choose.

AI: 6/10
The AI isn’t too bad, for an NES game, but it can sometimes guess the answer well before any human could do it–unless the human, like the computer, had a list of the correct answers, that is.
Gameplay: 7/10
The game is simple, so there’s not much to say here. I’d have rated it a point or so higher, but after matching a pair of doors you have a bit of a wait while your avatar rejoices, which gets boring very quickly.
Graphics: 9/10
The avatars are a little odd looking, and there’s nothing special about most of the graphics, but the rebuses look great. They’re well drawn and provide a nice variety of styles for the letters.
Sound: 6/10
The music’s pretty good, but it doesn’t always seem to match up with the situation–the music played when you match doors is quite low key–and gets a little repetitive, which prevents this getting a higher score.

Total: 7.2/10
This is a pretty solid little game. Though you might not want to play it much against the AI, it’s worth a play now and then, with a friend.