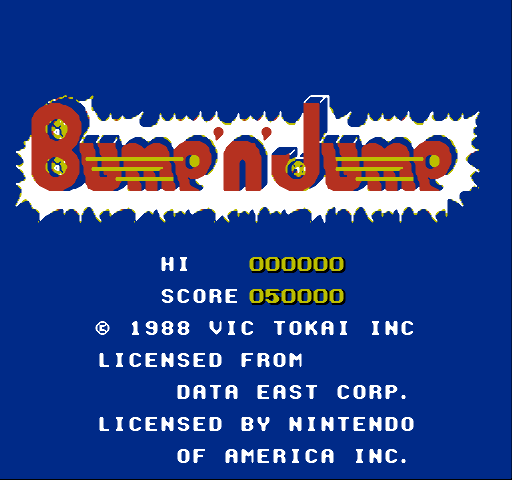 It’s a driving game, of sorts. The Japanese version was called Buggy Popper:

We start with a car driving away, with someone crying “Help me!” inside. Being the heroic gamers that we are, this is sufficient motivation for us to follow.

The premise of the game seems to be that we have a car which can jump at will, and we like to land on other cars and destroy them for no reason. Well, except that it gets us points.

Whoever designed these roads needs to be shot. Apparently in the bizarro-world that this game take place in, cars normally have the ability to jump (but only yours does, as far as I saw), so in order to save some of the cost of roads, they just left out some sections. Yeah, that’s logical.

But, we can forgive some strangeness if it’s a good game, right? Of course we can. Unfortunately, the designers decided to take all of my good will and step on it, but putting in a ludicrously long repair sequence when you drive over one of the bonuses on the road:

You sit at this screen for upwards of fifteen seconds while text flashes on screen assuring you that they are repairing your car and have not, in fact, run off with your money and girlfriend to Tijuana.

When you finally finish the first level, you are treated to the second level, in which the brilliant road designer decided that if there wasn’t any water to break up the monotony, then we’d just have to build some raised roads to block the lower ones instead.

Of course, there are helpful black areas that look like tunnels to pass through. They aren’t. They are just there because the designer was sadistic. The problem is that if you jump any time when the little jump warning box is on the screen, you’ll end up hitting the wall anyway, and it’s much harder to figure out when to jump when you have to make it over a wall instead of just some water. You can’t really tell how tall the thing is, since, as we all know, you should never do 3D on an NES.

So, we crash and die, and the game ends. I don’t know what happened to that car we were chasing earlier. Probably some girl was kidnapped, and since we couldn’t catch her she was killed. And it’s all the road designer’s fault.

Verdict: There are worse games. This is like a mix of Spy Hunter and Who Framed Roger Rabbit, and it doesn’t do well at emulating either. Play Spy Hunter instead.