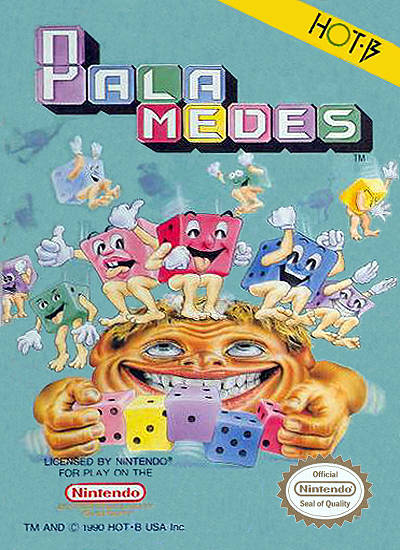 In Greek legend, a man called Palamedes invented dice. In 1990, a company called Taito invented Palamedes, a combination shooting and puzzle game, reminiscent of Bust-A-Move, but with dice. Originally an arcade game, Palamedes was ported by Hot-B to the Nintendo Entertainment System, Game Boy, MSX, and FM Towns.

You cycle your die through its six faces and position yourself before firing. If the die you shot matches the one it hits, they vanish. The six most recently eliminated dice appear in your "hand" at the bottom of the screen. Certain combinations in the hand allow you to immediately eliminate lines of dice, at the cost of the dice in your hand.

The arcade game is endless, but the home versions feature a series of levels with a fixed number of lines. If you can clear a level without using any hands, you'll score a huge 50,000 point bonus, but this will be very difficult at higher levels.

Palamedes includes a two-player mode, as well as a single-player 'tournament' mode in which you play against the computer.

Palamedes has a Japan-only sequel on the NES, Palamedes II: Star Twinkles.