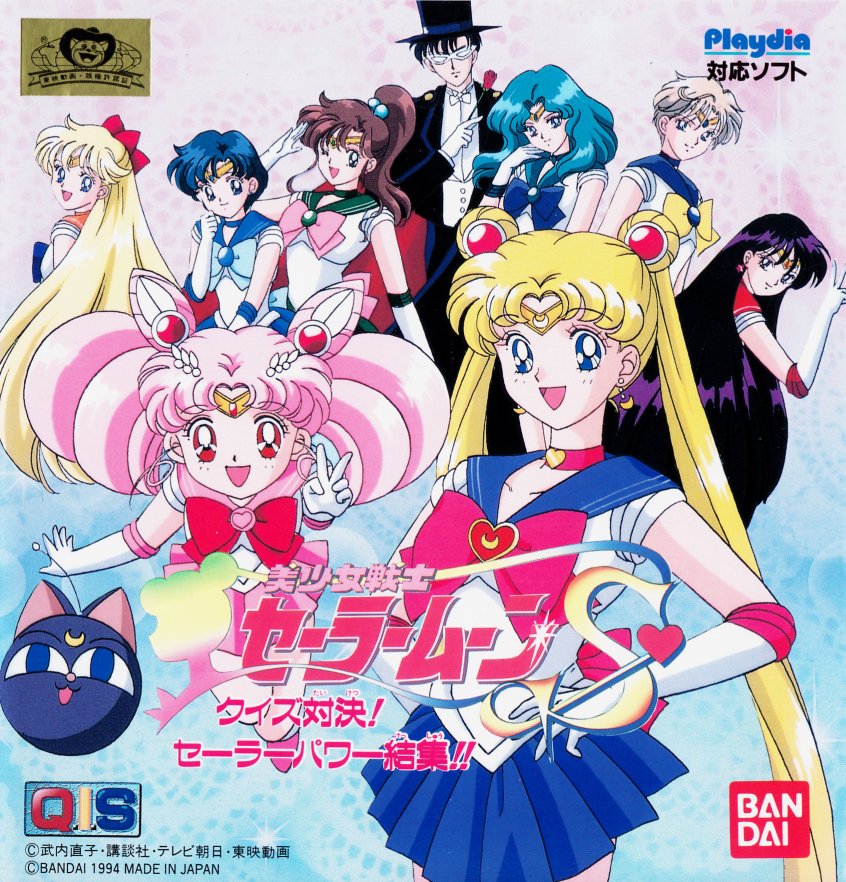 Quoting my description on MobyGames:

Tsukino Usagi and her friends, the Sailor Senshi, are attending a lecture by a picture book author, Misaki Asako, when a Daimon called Quiz appears to steal Asako's pure heart crystal.

There is one stage for each of the five Sailor Senshi (Sailor Moon, Sailor Mercury, Sailor Venus, Sailor Mars, and Sailor Jupiter), which may be played in any order. In each stage, the player must answer a series of twenty multiple-choice questions, testing his or her knowledge of the Sailor Moon anime, which represents a battle against a sub-boss. Upon successfully completing a stage by answering at least 16 questions correctly, the sub-boss is defeated, and the player receives a password, after which another stage may be selected.

Upon receiving all five passwords, the player may restart the game and enter the passwords, unlocking the final stage, in which the five Sailor Senshi are joined by Sailor Uranus and Sailor Neptune for a final twenty question quiz.

Throughout the game, there are clips of animation in the style of the anime. Upon completing the game, a karaoke version of the anime's opening theme is played over clips from the game.

A few words about the Playdia itself would not be amiss, I think. It was a CD-based console, released in Japan in 1994, reminiscent of the (similarly doomed) CD-i. Most of the console's library (according to Wikipedia, which has a list) was quiz or edutainment software, and much of it seems to be licensed titles based on anime. The first three games (according to GDR), released on 1994-09-23, were based on Dragonball Z, Sailor Moon S, and SD Gundam. The Playdia currently has no emulator available, so the only way to play these games is to buy the console. It looks like they're around $150 on eBay, and this particular game will set you back a further $50, so I don't recommend it.

I based my description on a scan of the manual and a video playthrough, both provided by SailorVGame.org. They are also the source of the screenshots in this post.

The game opens with a brief animated movie setting up the plot. I'll not recapitulate that here--you can read the description above. The quality of the animation is quite on par with the TV anime. It is perhaps a little more static than the anime, but it's well drawn and the video output by the game is of good quality.

The first thing the the player must do is decide whether to begin at the beginning of the game, or to enter a password and skip the first five stages, going straight to the final quiz. This is, I suppose, because the Playdia doesn't appear to support any kind of saved games. Passwords are the only option. The password is in the form of five pictures which the game reveals, one after each successfully-completed stage.

The player can choose the order in which to take on the first five stages, but all five must be completed before proceeding to the final stage. Unless, of course, the password has been gotten some other way.

The game itself is simply a series of multiple-choice trivia questions. There are twenty per stage, and six stages (counting the final stage), making 120 questions per complete playthrough. The back cover of the game boasts 300 questions, so I assume that they are randomized. Questions are generally read aloud by some character in the game.

The questions on Usagi's stage are related to the Sailor Moon anime. The question above, "「つきにかわて、おしおきよ」は、だれのせりふ？" ("In the name of the Moon, I will punish you" is whose line?), is very simple, but they do get progressively harder. The nineteenth question on Usagi's stage asks for the name of Prince Demand's younger brother. Demand was a character in the previous season (Sailor Moon R), which had recently finished airing. Despite its title, this game was released right in the middle of Sailor Moon S, so it's no surprise if it's not filled with questions about the still-airing season.

The other stages have questions on other topics. Minako's question number seven, for example, asks who was born from a flower: Oyayubi-hime (Thumbelina), Kaguya-hime (from a Japanese folktale), or Shirayuki-hime (Snow White). Ami's question number one asks what kind of shoes to wear on a rainy day: rubber boots, slippers, or sandals.

After ten questions, a clip of the currently-selected character's transformation sequence (straight out of the anime) is played, followed by the remaining ten questions. If the player has answered at least sixteen questions correctly, the password from that stage is revealed. Otherwise, the player is encouraged to try again. Either way, a clip is played of the stage's boss being defeated.

Upon successfully completing all five stages, the player may restart the game and choose to enter the password. A series of five doors are presented, each offering a choice of four pictures, one of which is the correct password for that door. After the correct password is entered, another anime clip plays, in which Sailor Uranus and Sailor Neptune join the others, and the final stage begins. More Sailor Moon trivia is in store (question 10: What was the name of Chibiusa's first love, the genius artist?).

Incidentally, the questions are not purely text based. In the above case, the Daimon asks who is displayed in those pictures.

Following the completion of the game, a short closing animation is played, followed by a karaoke version of Sailor Moon's opening theme, "Moonlight Densetsu".

And that's the game! It's actually not that bad, I suppose, as trivia games go. Certainly far too easy for any but fairly young children, but I suppose that young fans of the series might have enjoyed the game.

It looks like there were actually four games for the Playdia based on Sailor Moon. Considering that there were only about thirty games in total, that's a pretty substantial amount. Fortunately, SailorVGame.org has manual scans and gameplay videos for those available, as well, so I'll probably write something about them, in the future. It'd be nice to be able to write about the console's complete library, but I suspect that it'll not be so easy to get details on all of the games. I won't shy away from the detective work, though, so we'll see how it goes.